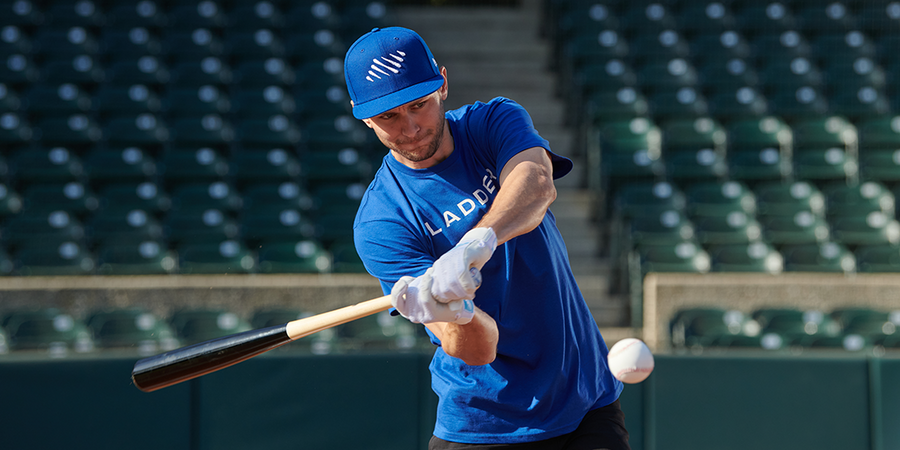 "Baseball Has Changed": Trea Turner on Bat Flipping and Base Stealing

It’s not often when you can get the full measure of an athlete. Profiles, press conferences and post-game interviews are generally engineered to minimize not only controversy, but the exercise of free thought. That’s what made our conversation with Los Angeles all-star Trea Turner so refreshing.

The man has thoughts — on base stealing, on bat flipping, on baseball strategy in general — that help to understand not only the five-tool athlete but also the game more broadly. One could be forgiven for salivating over Trea’s future as a manager or broadcaster with a decade or more left to his career as a player.

Read on for more from one of professional baseball’s true quintuple threats.

LADDER: In football, a running back might tear off 75-yard runs, but also get tackled a lot for loss, calculating that it’s probably better to live to fight another play. Is there an equivalent like that for you? 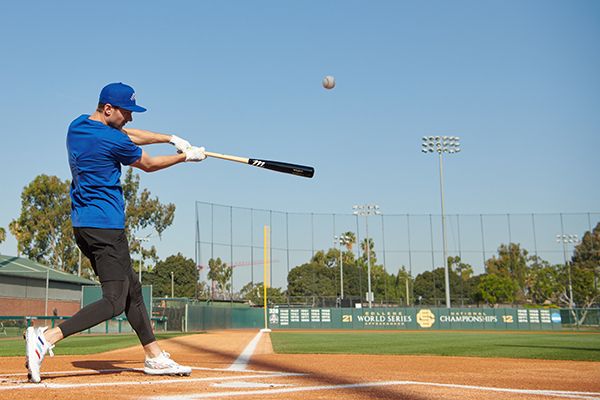 TREA: Yeah, baseball is a funny game, because you want to hustle, you want to give it your all, but sometimes you’re just out. If you hit a high fly ball to the center fielder and he's camped under it, maybe you run 90 percent as opposed to 100 percent. You're still hustling, you're still doing what you need to just in case something happens.

But there's that small difference when the game's on the line, and you need to score from first or second base on a single. Then you’ve gotta give it everything you got.

Some guys play hurt throughout a season because it's so long. So there are some days when you feel really good and you can let loose, and some days you can't. Football may be a little bit different in the sense that every little inch and yard matters — especially on replay — but there's definitely some comparison to that in other sports.

There are younger guys who are flashy, and there are traditionalists who drop a monocle whenever a player flips his bat. Where do you fall on that spectrum?

I'm in the middle. I think it's situational. When you have a beef with a guy and he pegged you and then you hit a homer off of him, sure, do it. I don't, because I think it's going to come back to bite me, so I just keep my head down and do my thing.

But it's a team sport too. Let's say you're down by 10, and you hit a homer and you're throwing your bat — you're still losing. But if that homer ties the game or you're in a division race or a rivalry, all of that should be in play and more.

At the end of the day, you’ve got to be yourself. In the clubhouse, I don't think anybody's going to be mad at you for being yourself. So do your thing and have fun and I think it'll work out.

Steals are down league-wide in each of the last five seasons — not even counting the COVID year. Why do you think that is?

I have a lot of opinions, but I think baseball has changed. It's scouting reports. [Teams] know where they can gain a run if they don't let a guy steal a base. And catchers are getting really good at catching and throwing, because they're getting a lot more athletic.

On top of those things, you're adding replay, so you’ve got to be 100 percent safe now — you can't just look like you're safe. Sometimes [replay] helps you defensively or offensively, but on the basepaths it seems to hurt you quite a bit, because you’ve got to be perfect.

But I think [steals are] coming back a little bit in my eyes. I know the stats probably don't say that. Baseball players got really big because they were looking for the homer, and now I think they're starting to get a lot more athletic again. Then guys can be fast and powerful at the same time. 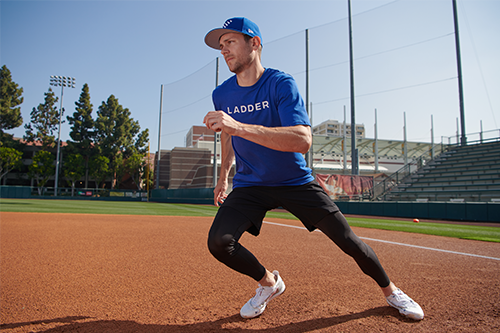 I think it's on me. I don't always steal sometimes, even when I can, because I feel like being on base is too valuable. Not stealing the base, the pitcher still has to worry that you're going to steal the base. So when I don't feel great about it, I just stay there and pretend like I'm going, and I think that's a benefit to my team.

I probably should steal more. I've heard that many, many times. But I'm also the guy out there — those people aren't [doing the] running. And scoring runs is more important. How do I get to home plate? Sometimes that's a steal, sometimes that's just staying put. So, sometimes not going is the right play for the team.

Does that mean you have standing permission to steal whenever you feel like it, or do the coaches and manager have a say in this?

Yeah, I have permission like 99 percent of the time. Let's say five times a year, I'll get a sign from the dugout, like, "Hey, don't run." But that's also situational too: Maybe we want the guy behind me to hit, and if I steal the base they'll walk him.

It sounds like, given the situation, there may be as much value in creating anxiety for the pitcher as going for the steal.

Yeah, I think that's what speed does in general. When you hit a ground ball to shortstop and he's gonna make the play, but he knows you're really fast, that's a little bit of anxiety right there.

The same goes for pitchers when they know a fast guy's on first base. They gotta worry about that stolen base. And that anxiety, I think, is beneficial.

So the teams that can control the running game and still make pitches and play defense, I think that's a big benefit. We're talking a lot of baseball strategy, but I think that's why this game is beautiful. It's all the little things like this that make it tough.

What kind of training do you do to support all that baserunning? 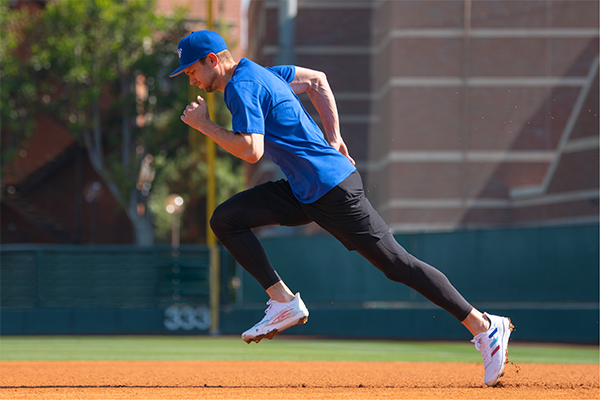 During the offseason, I go to a trainer by my house in Florida. I tweaked my hamstring in high school because I probably ran incorrectly for a lot of my younger life. I went to this guy and he yelled at me a little bit and gave me what I needed — he really helped me learn what to do.

It's kind of long and tedious, but just driving your knees and staying in a straight line as opposed to — sometimes people have their legs behind [them], and then they're pulling with their hamstrings a little too much. That's where a lot of hamstring injuries come from.

Sometimes [my trainer] sees something: "Oh, you're doing a little bit of this," and I create a bad habit during the season, and we get back on top of it in the offseason. But during the year, it's more maintenance on how I'm feeling and making sure that, if something's tight, I get that worked on so I can run correctly.

You alluded to the role of statistical analysis — how do you feel about the increasingly technocratic element of baseball?

I think it's really good as long as players can apply it. You can have all these numbers and show them all these scouting reports, but at the end of the day, the player has to execute or form his own opinion.

And then, you know, "Why didn't it work out? The numbers said this." Well, you’ve got to play the game as well. So, numbers are great, and I look at them, but you’ve got to form a game plan to use those numbers effectively.

Are there any pre- or post-game rituals that you follow? 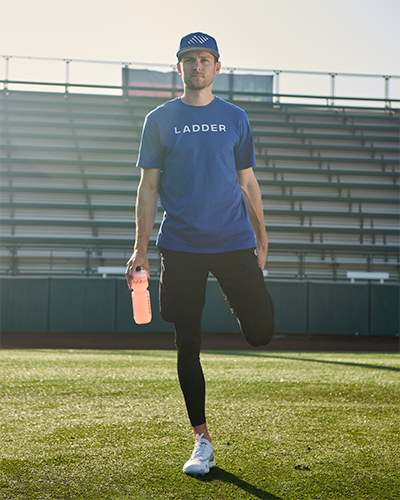 I'm not really superstitious, I just try to have a routine: I get in the hot tub before the game, take a shower, and then go into the weight room and do my little workout, get my pre-workout drink in there and then go into the cage, take my swings and then get ready to go. Postgame, I don't really do anything. Just kind of hang out with teammates and whatnot.

What do you think is the most overlooked part of your game?

I think it's my mentality. Because you can't see it. On TV, you can see the power, the speed, the swing and all that, but you don't know what guys are like until you share a clubhouse with them.

"Compete and Move On": Meet the Unshakeable Trea Turner