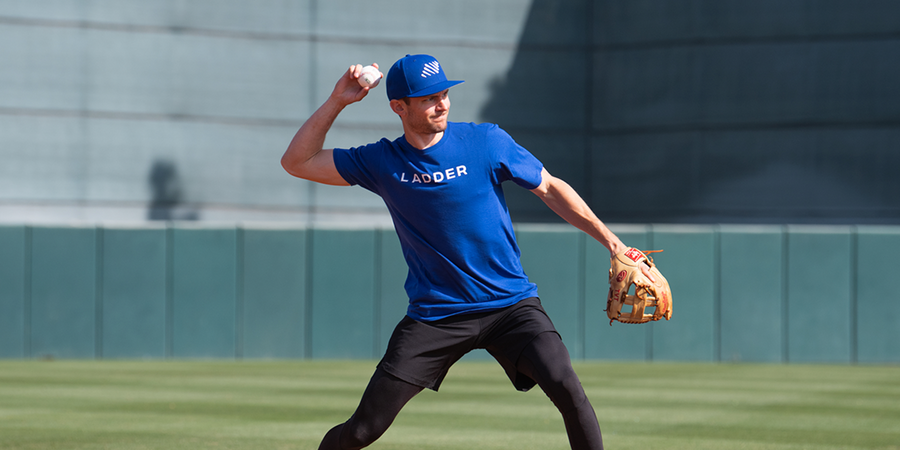 "Compete and Move On": Meet the Unshakeable Trea Turner

All-Star shortstop and LADDER Athlete Trea Turner eschews flashiness — but sometimes the dude just can't help it. Credited with possibly the smoothest slide of all time, any showy play by the five-tool superstar is purely residue, not design.

“When I think about my feet, they don't move correctly. When you just tell me, 'Hey, run over there,' I can do it," he says, soft pedaling the feet in question, which are arguably the fastest in professional baseball.

He's a living ideal of the head-down, gut-it-out ballplayer, characteristics that usually relegate an athlete to the dustbin of “scrappy role players" or “overachieving upstarts" — except those guys don't average No. 1 overall in fantasy baseball drafts.

Turner is that uncommon intersection of maximum talent with maximum effort, the kind of player you can't help but root for. We caught him stealing some downtime on a recent road trip, during which he shared insights into his regimen, recounted some rare missteps, and drove home the importance of the little things.

Train and fuel like the pros with LADDER's line of premium performance supplements.

How recognized are you when you go out in the world? Can you get a Starbucks without having to sign autographs? 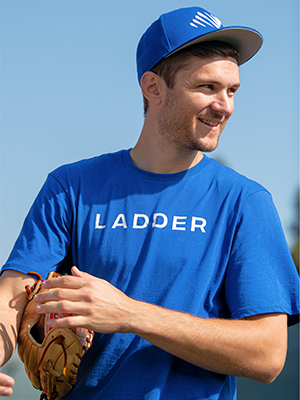 Since I started playing for L.A. I get recognized a little bit more now, but I'm pretty under the radar. Maybe I'll get a hello, or "good game last night," but for the most part, I go pretty unnoticed.

Among many things, you're known for stealing bases. How many factors have to align for a successful swipe?

Depends who you are. For me, a million. But some people are simpler in their thought process. Base stealing is tough, because you risk so much: If you steal the base, it's what you're supposed to do, but if you you get picked off or you're thrown out, it looks dumb.

So there's a lot of risk-reward there, but that's why I try to calculate as much as I can — score of the game, who's on the mound, scouting reports, who's catching, who's hitting. But at the end of the day you just have to be comfortable with making a decision.

Sometimes some things tell me not to go. But when it looks good, I just want to be aggressive, stop thinking, and go for it. That's the art of base stealing.

That's the art — now for the science: You've mentioned in the past the importance of running efficiently. Can you talk about that?

For me, the biggest thing in sports is health. Obviously, there's plenty of talent across the board, but it's hard to be good when you're not out there.

I'm expected to run hundreds of sprints during a season, so in the offseason I go to a trainer by my house in Florida — somebody I've been going to since high school — and work on running a few times a week. A lot of that running is efficiency and running properly, and making sure to prevent injury and maintain or gain speed.

How do you train for batting average and power and speed, maintaining mass while remaining quick and agile? 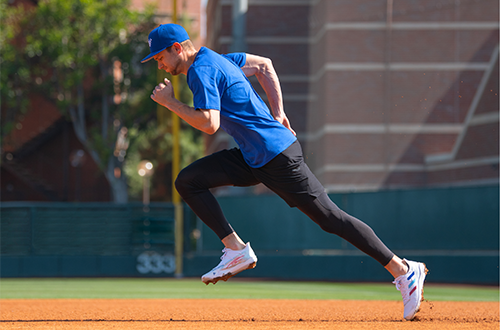 In college I was pretty fast, but I wanted to be a good hitter, so I definitely was trying to gain weight. But in my early 20s I realized weight doesn't always correlate to strength.

So I weigh 180 pounds, give or take, and I feel like that's the weight where I feel the best — I can run, but I can also drive the ball to parts of the field. It took me a while to realize that.

My metabolism's so fast that it's hard for me to gain more weight than this anyway. I would have to drink so many protein shakes a day and eat so much food and just feel basically bloated.

Mornings when I'm at home, I usually just have a coffee and some water and maybe Hydration. When I go to the stadium, I start to get more calories — I eat most of my meals at the field. It can be a large meal or a peanut butter sandwich. It could be bananas or protein shakes.

Do you have any idea how many calories you consume in a day?

I do not. I have no idea. I don't really keep track of that. I feel like I know when I need to eat more or get more hydrated. If I notice I haven't eaten all day, I'll force myself to eat something.

What are your favorite ways to train?

I do a lot of lower-body stuff throughout the day that I incorporate into my warmups. Sometimes, early in the day I'll do some full-body or upper-body lifting, but 45 minutes before every game I do a lower-body lift real quick, and that usually consists of squats or deadlifts. I like deadlifting a lot.

I like band work as well, putting bands around my ankles and knees and doing a lot of hip stuff. Being in the infield and stealing bases, I think that helps me out a lot.

I do a little bit of everything to focus on the hips and feet. Feet are big in baseball. You wear cleats and you can easily start walking incorrectly, on the outside foot or whatever it may be, so I pay a lot of attention to that. I do some arch stuff and balance and things that help me there.

There's got to be a line to walk between getting as much out of these workouts as you can and not gassing yourself for that day's game. 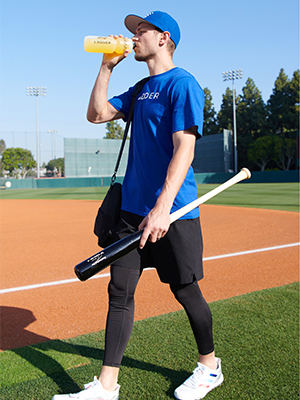 That's always the battle. People forget: baseball, you play every day, but you're supposed to lift and you're supposed to work out and it takes a lot of time. So you think you're going to be 100 percent energized for the game when you lift that day and that's just part of the game.

What does your recovery and training look like now compared with when you first entered the game?

I think it's diet in general. I love sweets, sodas — all that stuff — but definitely drink a lot less of them. I drink a lot more water and hydration drinks and protein shakes than I did in the past.

You've been doing this the majority of your life — if it weren't for professional baseball, what do you think you'd be doing now?

That is a great question. I have no idea. I went to college for chemical engineering. I was really interested in chemistry when I was younger, and that didn't work out great; I didn't get the best grades, but that always interested me.

Getting a little older and seeing how the world works, business interests me now. And being a college baseball coach would be pretty fun. I enjoyed my years in college, and those programs are special.

What do you think is your most valuable trait as an athlete? 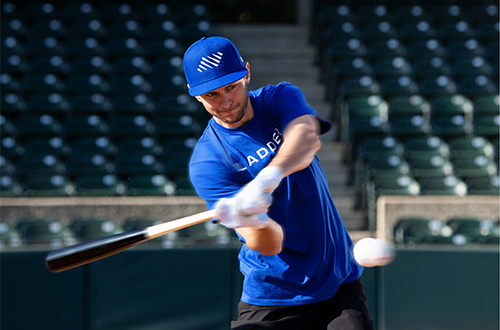 I think it's the mindset, just how I approach things. Guys play for all sorts of reasons, but I think just competing every day is fun, and I think that's my biggest asset: I can compete and move on.

Some days, you're not going to be very good. But just picking it back up and getting back out there the next day and giving everything you've got all the time is one of my bigger assets.

Which LADDER products are your favorites? How do you incorporate them into your routine?

My favorite is the Pre-Workout. I used to use it working out, but now during the season I like doing it maybe an hour before the game, just to get me going. And I've been talking about the Hydration — I think that's important. So I'll just mix that in throughout the day.

And then I've been doing the Superfood Greens as much as possible. I didn't really know about them until last year when I got traded and a lot of guys were doing it. So I started mixing that in every once in a while just to be healthy. I think it's really good for you.

The other day, for the first time, I mixed (Lemon Lime) Hydration and Superfood Greens together, which is unbelievable. I never thought of that until like a week ago. I did it, and I was like, “Oh, this is amazing."

Do you ever talk supplements with the other guys in the clubhouse? 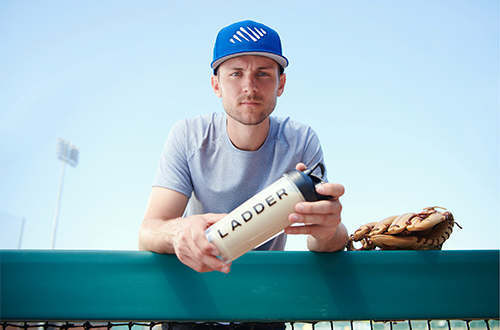 When you're on a team and one guy does something, the others start to ask questions. And then before you know it, you've got a group doing it. So I think the guys are starting to drink a lot of Superfood Greens around the clubhouse.

Are there any motivational quotes or sayings that have stuck with you that guide you at all?

That's a tough one for me. The only one I can think of off the top of my head is “hard work beats talent when talent fails to work hard." I always liked that one when I was younger because I felt like I was undersized and felt like I worked hard. Now, later in my life, it's a little different. I feel like that talent has come around. But you know, I obviously still want to work hard.

You're credited with possibly the smoothest slide of all time. Have you contemplated finishing with a moonwalk or Dougie?

I'm very, very, very bad at dancing. If I had that swag, I probably would try it and it'd be pretty cool, but I'll leave that for somebody else. I don't want to embarrass myself.

You're at the top of not just your game, but the game. You've won a World Series, you've made consecutive All-Star Games — how do you go about goal setting from here? 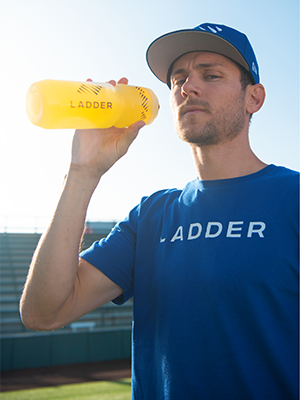 I'm super competitive, so when I do something — it could be working out, it could be finishing a paper, it could be learning something — I just try to do it as well as I can. And at the end of the day, I can be happy with what I did.

Two hundred hits would be cool. Thirty homers would be cool. A lot of things I haven't done in my career individually would be cool. But if I get 199 hits or 29 homers, I won't be mad. Today, I just want to have good at-bats. Tomorrow, we'll figure it out — just don't give anything away. Don't give any at-bats away, any plays away.

So, now I'm just competing with myself, and that makes me feel a little better. Because if you set a big goal and you don't do it exactly as or when you planned, you feel like you failed. If you give me two tries, I can do better the second try — that's how I approach baseball.

And if I hit some of those cool markers individually it would be nice, but championships are always the best. When we won in 2019, that's probably the most fun I've ever had doing anything. That joy and camaraderie with your teammates — winning in general — is great and would be cool for this year.