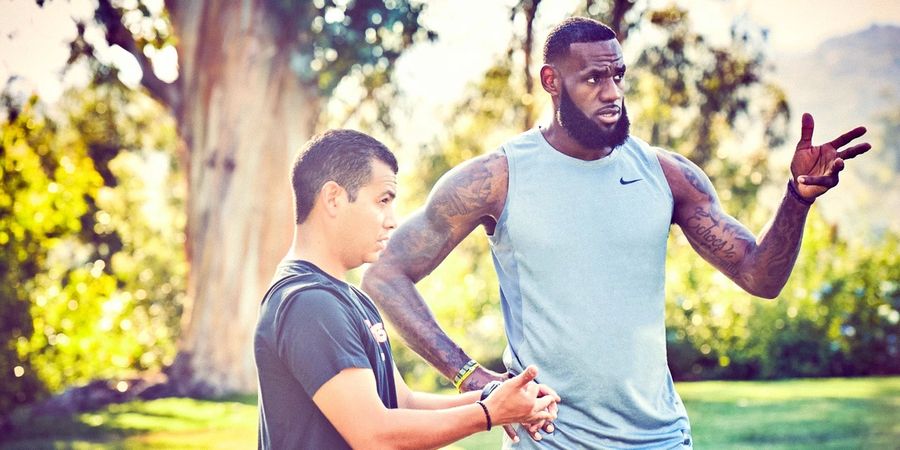 Mike Mancias always knew that he wanted to work with the NBA. In and after college, he interned in a training capacity with a variety of teams, and with the NBA summer league. That summer, he ended up meeting with the head trainer of the Cleveland Cavaliers, ultimately landing a gig with the team. That was LeBron James's first pre-season in the NBA.

“At this point, I had no idea who LeBron James was," Mancias says. “I saw something about this kid on the cover of Sports Illustrated. Way back then, if someone asked me his name, I couldn't tell you. I was just a young guy from Texas trying to make it in the NBA."

Mancias ended up getting a job as a full-time assistant trainer with the Cavs, where his relationship with LeBron grew. “My whole goal was to make it to the NBA and work in the professional ranks—never to be a personal athletic trainer," he says.

But that's what happened. And when Mancias and LeBron realized that their principles, work ethic, and passions were in sync, they paired up so that Mancias became responsible for everything related to LeBron's body and health: training, food, recovery, and more.

Elevate your own performance with LeBron's premium line of LADDER supplements, from pre-workout to post-workout and everything in between.

“I'm lucky that he's a strong-willed individual," Mancias says. “What he cherishes is in parallel with what I do. And you're never really work if you love what you're doing."

Through his legendary NBA career, LeBron has fortified his reputation as a GOAT when it comes to keeping care of his body. Here, Mancias shares some of the driving principles behind what helps make LeBron LeBron, and how Mike stays fit despite his busy, travel-filled schedule.

To ensure top performance and longevity, the body can't just survive the rigors of an NBA season. It must conquer them. And to do so, it's not just one characteristic that makes up an elite athlete's body. For Mancias, it's about ensuring that all five elements that go into LeBron's wellness are working. These are:

One of Mancias' main jobs is to always look ahead—short-term and long-term. Everything that he and LeBron do keeps both ranges of goals in mind. “We're all about longevity and how we can prepare," Mancias says. “If we're about to embark on three games in four nights or four games in six nights or whatever, it's all about finding the right balance."

And that balance includes making sure the five pillars that go into LeBron's anatomical and biological throne hold up.

“At the end of the day, LeBron is gifted with a combination of athletic ability, IQ, and a strong will," Mancias says. That makes it easier to handle the strength and conditioning.

For conditioning, there's nothing better for basketball than basketball, and at this point in LeBron's career, Mancias ensures that he doesn't over do it in the weight room. During the off-season, Mancias makes sure that LeBron has enough in the tank for the season—especially if he's playing 40 minutes a game. For additional conditioning—and to ease strain on the legs—LeBron loves the VersaClimber. They also do pool workouts, which include swimming and treading water.

For strength, Mancias focuses on core and balance. Plyometrics...not so much. “He knows how to jump," Mancias says.

“We realize it all starts in the core. Everything we do is core-based," he says. “There's a saying that you can't fire a cannon from a canoe. If your core isn't strong enough, your legs will not be able to perform well."

For core work, LeBron likes planks, pushups, jackknifes, and prone cobras on or off the physio ball, as well as anything with single or staggered legs to emphasize the core. For mobility, he likes dynamic movements (think bear crawls and variations). Check out LeBron's full "Core 4 Workout" here.

At this point, Mancias thinks in terms of tweaks to programs and plans—not whole-sale changes.

“We've had some pretty good success in the past with what we're doing, and LeBron is a creature of habit," he says, “so we're not going to stray too far." Mancias will try to see where he can fine-tune moves and actions to adjust to things that he may be seeing or LeBron may be feeling.

“If he landed a particular way after a dunk or jump shot, I might see compensation patterns. Maybe the right leg is a little sore, so we have to look at what the left leg is doing. You have to keep the body in balance," Mancias says.

LeBron's pre-game habits help him physically, and they also help him maintain his edge, Mancias says. Four things that LeBron does include:

The first 30 minutes after a game are also key to getting him ready for the next one, Mancias says. So that will include a combo of an ice bath, stretching, and proper nutrition—which includes LADDER Plant Protein immediately after he walks off the court. After he leaves the arena, he'll have a bigger meal to refuel.

Being the keeper of LeBron's body means Mancias doesn't have much time for himself, especially when they're on the road. So his own workouts have become super-efficient: lots of circuit training—no more than 25 or 30 minutes—with bodyweight moves or dumbbells. He tries to combine push-pull movements in his upper body with legs and core.

Mancias also places a focus on nutrition. Two years ago, he tried eating vegan and sticks with it 99 percent of the time. When he tried it, he felt great and noticed that he wasn't sluggish, even after the long flights and brutal travel and schedule of an NBA season.

“There's no way I can do my job being in charge of LeBron's health if my health deteriorates," Mancias says. “As I get older, I've got to make sure I stay young."

How LeBron Builds His Abs: The Core 4 Workout

Get the Recipe for LeBron James' Granola