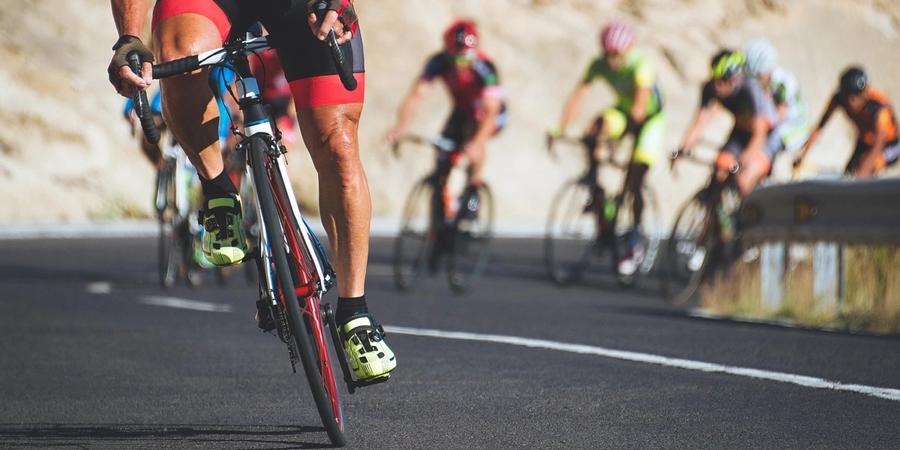 One of the perks of being a serious endurance athlete is that you can pork out with impunity. All of that training burns major calories, which is why we can do real damage to all-you-can-eat buffets.

In fact, sometimes it seems like we’re hungry all the time — except during a hard workout or race. In such situations, the “fight or flight” response kicks in, sending our nervous systems into overdrive and damping our appetites so we can focus on the job at hand.

The only problem with this little bit of hormonal autofocus is that it can cause us to burn through a ton of calories, so if things go on for too long — say, more than 90 minutes — you’re going to run low on gas.

To avoid running on an empty tank, here's how to fuel your body during a race.

How Your Body Burns Fuel When You Exercise

When you exercise, your body can pull fuel from a few places:

When your exertion level is low, or when you’re training in a lower heart rate zone, your body burns a greater percentage of fat than carbs as fuel. Even really lean athletes have enough fat to last them for a while, so if you’re noodling in recovery mode or building base, during-workout nutrition isn’t quite as important (but hydration still is!).

In fact, many athletes deliberately train in a fasted (i.e., glucose-deficient) state during these kinds of workouts to teach their bodies to better utilize fat for fuel. But as the intensity of your workout increases, so too does your body’s reliance on carbs for energy.

If you plan on exerting any real effort, or if you’re planning on training for more than a couple of hours, you’re probably better off refueling with carbs as your body burns through its glycogen stores.

As a cyclist who once (unintentionally) rode 100 miles with 10,000 feet of climbing on one banana and half a Clif Bar, I can tell you that things can get really grim really fast if you’re not properly carbed up on long rides.

Glycogen is basically a back-up blood sugar supply. It’s readily converted back to glucose for use as energy. Liver glycogen can be diffused throughout your body, including your muscles, but muscle glycogen works only for the specific muscle in which it’s stored.

When your glycogen stores are completely topped off, you should have about 90 to 120 minutes worth of fuel with which to work. After that, you “bonk” or “hit the wall.”

If you’ve ever been in the middle of a training session and suddenly felt like even the simplest task was an epic challenge, that’s bonking. Technically, you can still function at that point, as you still have fat stores and lean mass to tap into, but you won’t perform as well.

How to Fuel up During a Long Event (60+ Minutes)

First off, carb-load before your event. Since there’s no easy way of knowing when your glycogen is at 100 percent, it’s smart to hedge your bets by consuming a carb-rich meal a few hours before it begins.

During your event, it’s a good idea to start feeding about 30 minutes after you begin instead of waiting for the first hints of fatigue to set in. Why? Because our bodies didn’t evolve to optimize fuel production during 140.1-mile Ironman races and double centuries, and if you wait until you’re tired to refuel, you’ve waited too long.

During extreme effort, the human body can burn 800 to 1,000 calories per hour. Unfortunately, we can only absorb about 360 calories of carbs an hour, meaning that we’re dealing with a situation of diminishing returns right off the starting line, so it’s important to get a jump on glycogen replenishment.

360 calories of carbs is equivalent to 90 grams, since there are four calories in a gram of carbohydrates. But getting those 90 grams isn’t as easy as wolfing down a jelly donut, since different sugars absorb in different ways and at different rates. If you consume nothing but glucose, you’ll only absorb about 60 grams an hour, for example.

But there’s a trick: Fructose absorbs differently than glucose; it needs to pass through the liver. This process can happen concurrently to glucose absorption, so if you consume a mix of the two, you should be able to absorb more carbs overall — 90 grams an hour.

But while this number is backed by some respectable science, don’t take it as hard and fast. Just because you can probably absorb 90 grams of carbs per hour doesn’t mean you should. During “shorter” events lasting between one and two hours, you’re probably not going to need 90 grams per hour, so you might as well save your digestive system the stress and stick to 30 to 60 grams per hour.

If, however, you’re going longer, your best bet is to keep 60 grams per hour as your baseline, and add up to 30 grams per hour on top of that depending on what your system can comfortably tolerate.

90 grams may seem like a lot of carbs to absorb, but as with most aspects of training, you can increase your body’s ability to handle it. Start with an amount that works for you, and then slowly increase your intake. Just remember to experiment during training, not during races.

Also, make use of all that fancy data technology you’ve probably invested in. Set a timer on your computer/phone/bionic implant reminding you to drink and eat at regular intervals.

The amount of your fluid intake should vary depending on your sweat rate, which, according to the American College of Sports Medicine, can range from 8 to 67 ounces per hour during an event. Finding your perfect hydration level can take some time, but cyclists typically start with about 24 ounces an hour. That’s roughly the volume you’ll find in a standard water bottle, making it easy to keep track.

You may be tempted to fill that bottle with a sugar-laden sport drink so that you can get your feeding and hydrating out of the way at the same time. There’s an off chance this might work for your unique physiology, but odds are that the hypertonic (more concentrated than blood) nature of that tasty beverage won’t absorb effectively.

It can lead to gastric distress or, as I’ve witnessed at many a cyclocross race, vomiting. You’re better off with a hypotonic (less concentrated than blood) drink with less sugar. Such solutions tend to absorb more efficiently and effectively.

A good sports drink will offer carbs as a combination of fructose and glucose. One serving of LADDER Hydration contains 16 grams of carbs, so if you drink three servings per hour, that's 45 grams, meaning you’ll only need to eat 15 to 45 grams (or about 60 to 180 calories) more carbs in that hour.

You could always try to get all your carbs in liquid form, which isn’t uncommon during triathlons, but this presents a couple of problems. First, if you stick to a hypotonic mix, that’s a lot of water.

Second, consuming only one item for hours on end while suffering mentally and physically is a recipe for flavor fatigue — where you achieve such a distaste for nourishment that your exhausted, exercise-addled brain actively prevents you from eating or drinking. By mixing liquids and solids, you stand a better chance of avoiding flavor fatigue and maintaining your appetite.

What Should You Eat?

Anything that tastes good and consists primarily of carbs will probably work. You want to absorb those sugars fast, so high-glycemic foods (i.e., those that raise blood glucose levels quickly) are great in this situation.

Some of my go-tos include bananas, melon, other low-fiber fruit, and mini-pretzels. Three to four hours into an especially hard event, I also take great pleasure in an eight-ounce can of Coke. (Hooray for carbs and caffeine!)

But if your event is going to be consistently grueling or jarring on your system — triathlons and marathons come to mind — gels and chews are both easy-digesting feeding options. Again, make sure to read the ingredients to verify the sugar sources.

You Ironman folks out there are probably scratching your heads, given it’s rather difficult to fuel while swimming. And by “difficult,” I mean impossible.

So make a point of being fully fed and hydrated before you start your race and focus on fueling the moment you hit terra firma. Have a full bottle either by your bike or in your transition bag to sip as best you can as you change.

As for eating, it’s up to you to determine how much you can tolerate and/or accommodate. If you can chomp a chew or two during transition without slowing down, great. Otherwise, make a point of feeding during the first few miles on your bike. Keep in mind that it’s easier to feed when cycling than it is when running, so don’t fall behind here.

That said, suddenly stuffing your gut might lead to GI issues, so it’s important that you learn what your intake limits are here. Treat this transitional fueling like any other part of your training.

A Word About Protein

While protein is instrumental post-event, it should play very little part in during-event feeding. Your goal is to restore glycogen as fast as humanly possible, and protein slows absorption.

The exception is a multi-stage race. In this case, you want to maintain the balance of protein turnover (the synthesis and degradation of muscle) as much as possible, so some protein during such an event is a good idea. Just keep carbs at the forefront of your feeding, and experiment with protein during training to figure out how much you can tolerate.

While all of this advice gives you an excellent starting point for event nutrition — or hopefully a way to troubleshoot your current method — keep in mind that personal taste and biology go a long way towards determining the right foods for you. Never, ever experiment during a race. But when you’re training, don’t be afraid to try different foods, in different amounts, in different solid-to-liquid ratios.

Also, don’t be afraid to take samples offered at race registration booths (for later use), or to mooch off your friends when they have something you’ve never tried.

Find the intersection of what works scientifically and what works personally. Once you’ve discovered that, you’ll be unstoppable.

How Much Protein Should You Consume After a Workout to Maximize Gains?