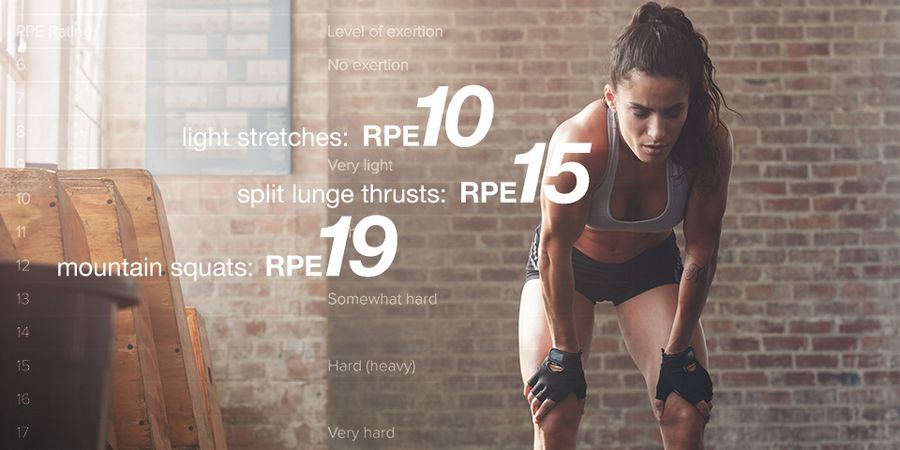 Are You Training Hard Enough? Know For Sure Using RPE

Fitness types are obsessed with numbers. If it's not our bench press max or 5K time, it's our body fat percentage or arm girth. We want hard evidence that we're getting fitter, faster, stronger.

But there's a fundamental flaw in the lab-rat approach to fitness. We may think we're the Terminator in the gym, but we're not cyborgs. We're organic beings, and our bodies rarely respond to training predictably from one day, workout — or even set — to the next.

How to measure the output of such fickle creatures? One such means is the Borg Rate of Perceived Exertion Scale, or RPE.

Want more out of your time in the gym? Boost endurance and fight fatigue with LADDER Pre-Workout.

What Is Rate of Perceived Exertion (RPE)? 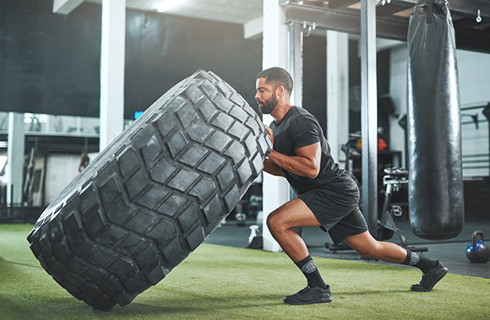 As the term suggests, rate of perceived exertion is a subjective (egghead term: psychophysiological) measure of how hard you feel you're exercising relative to what you believe is your maximum intensity — regardless of whether you're running, cycling, rowing, swimming or lifting weights.

Indeed, it can be used for just about any form of exercise. When used regularly, it can give you vital clues to your body's response to exercise, and how you can adjust not only your laps, intervals, loads, sets, and/or reps in your current workout (whatever kind of cardio or strength training it may be), but also how to plan out your exercise program in the long term.

That makes it a powerful tool for auto-regulation, which is the adjustment of your training based on your body's real-time response to an exercise or workout. 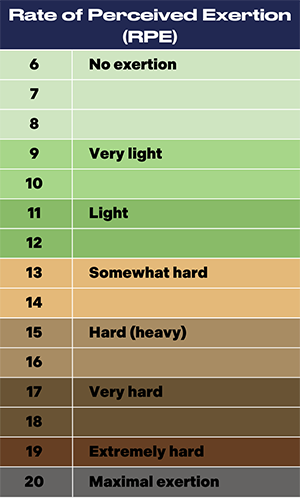 How RPE Relates to Heart Rate

Why 6 to 20? "It's designed to correspond roughly with heart rate divided by 10," says Dr. Eric Helms, an exercise scientist at the Sports Performance Research Institute New Zealand.

At rest, he explains, a fit person typically has a heart rate of about 60. So their Borg RPE will be a six; during maximal exertion that same exerciser may hit 200 — so their rate of perceived exertion will be 20.

Why Should You Use RPE? 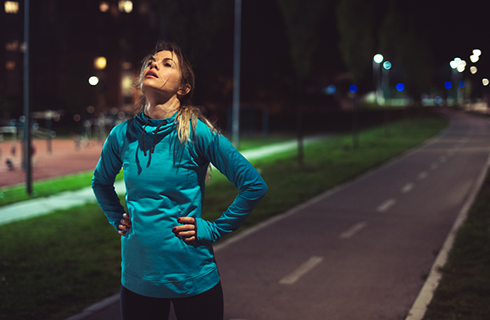 Progress comes in fits and starts. One day you feel fast and energized during your morning runs; the next you feel sluggish and flat-footed. One week you're banging out extra reps in the bench press and squat, and the next you struggle to even make it through your third sets. Ignore such fluctuations and you risk overtraining or under-training, and even injury. Heed them, however, and you can reach your goals faster while minimizing those risks.

Rate of perceived exertion formalizes the concept of "listening to your body" during a workout, which means you can use the RPE scale to determine whether it's a good day to push harder (such as when 6 mph on the treadmill delivers a lower RPE than normal) or back off.

And since it's entirely personalized to how you feel during a specific workout — rather than a universalized scale of what your body should be able to do — it informs you exactly when to hold 'em and when to fold 'em.

It also eschews any instruments or technology; all the Borg rate of perceived exertion requires is your ability to count — and fairly rate your own effort. That last part means that it's not always the most accurate way to gauge training intensity (more on that in a bit), but it is the most readily accessible. 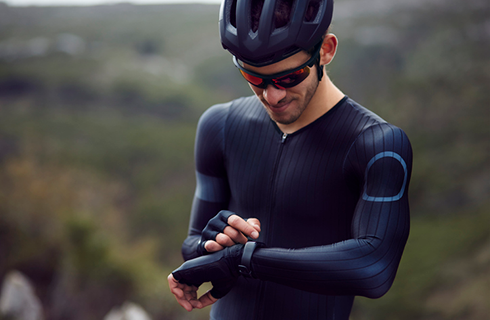 Heart rate — which can be affected by determinants like age, fitness level, and prescription drugs — is not the only factor in gauging perceived exertion. “The Borg RPE scale is an overall rating of all the signals your body is sending you," says Helms.

Those signals also include: muscle burn, sweat and respiration rates, ability to speak, and even anticipating the end of an exercise. Taken as a whole, these factors give you a Borg RPE, which can change significantly throughout the course of a single workout.

Let's say, for example, you're doing a workout. Light stretches at the beginning of the workout might rate a nine or a 10; lunges might get you to 15; and jump squats push you to 19. Overall, you might rank your “session RPE" — your overall effort level for the workout — a 15 or 16: somewhere between “Hard" and “Very hard."

Of course, someone else might do the same workout — same reps, tempo, weights, and rest periods — and perceive the workout as harder or easier; his or her effort may also peak at different times.

How to Calculate RPE

RPE's subjectivity can make it seem arbitrary. "Studies show that people are often poor judges of their own training intensity," notes Trevor Thieme, CSCS, and LADDER's senior manager of fitness and nutrition content. “They tend to overestimate how hard they exercise."

To help make RPE more objective, Helms suggests a technique called “anchoring," in which you link effort levels to a given activity at a known intensities. For example, you might run on a treadmill, gradually increasing speed over a 20-minute period until you hit peak effort, noting your perceived exertion along the way.

How do your legs feel at each level? How is your respiration? How hard is your heart pounding? Using this strategy, says Helms, regular exercisers can make more reliable RPE estimations from one day to the next.

How to Use the RPE Scale in Your Workouts

Like any other fitness technique, RPE training requires practice. To do that, start recording your highest rate of perceived exertion during exercise, as well as your session RPE once you're done.

How high do you go in any single session? Does it fluctuate based on the day of the week, the time of day, your diet, the type of workout you perform, or how many days in a row you exercise? Make sure you're making apples-to-apples comparisons — don't compare a sprint workout to a yoga session. And don't assume that higher is better.

If you know from experience that running on a treadmill at 4 mph usually feels like an 11 or a 12, and it feels like a 14 today, that's a sign you should back off. If you have the opposite experience, consider pushing yourself harder.

For Cardio and HIIT 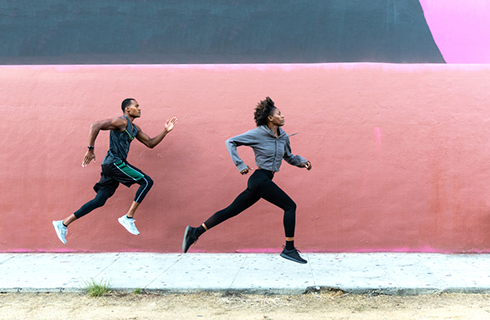 Once you get comfortable with the RPE scale, start assigning yourself session RPE goals for each workout. This doesn't have to be complicated: if you discovered that Mondays are high energy days for you, take advantage of that by trying to hit a 17 consistently every Monday workout. If you're performing steady-state cardio — say, an easy three-mile jog — you could aim to make the whole workout an 11 or 12.

For interval workouts, one oft-used approach is to perform your interval sprints at an increasing intensity, separated by rest periods of equal or greater duration. So you might start with a five-minute warm-up at a 10 RPE, then perform a one-minute sprint at a 13; drop back down to a 10 for two minutes; then perform a sprint at 15, and repeat in this manner, eventually maxing out with a full-blown, one-minute sprint at an 18 or 19 RPE. This is an especially effective approach when you're doing outdoor cardio, like trail running or road biking, and have no other way to monitor your intensity. 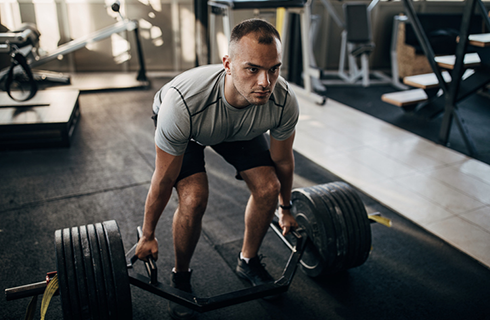 If you're into serious lifting, you may benefit from using a slightly modified system called the “RIR" — or Reps in Reserve — scale. It's a 0-to-10 rating based on the number of reps you estimate you could do if you worked to exhaustion with a given weight.

The RIR numbering system takes a little getting used to, because, unlike RPE, a lower number indicates a tougher set: if you rate a set a "1 RIR," for example, you're estimating that you could have done just one more rep before reaching technical failure, or the point at which your form breaks down. (By the way, that's always the point at which you should end a set — going until "absolute failure," or the point at which you are physically incapable of completing another rep, increases your risk of injury.) A "10 RIR" rating, on the other hand, is very light work, while a "5 RIR" falls in the middle.

RIR helps you to record — and prescribe — effort levels in each planned set of your workout template. If you're doing dumbbell curls one day, for instance, you might write the following in your journal:

That's three sets of 12 reps, with two reps in reserve at the end of each set. So you choose a weight based on past experience and crank out three sets.

If, on completion of your third set, you rate your RIR a 5 — that is, you have five reps left in the tank — make a note of that and bump your weight up next time. If you struggle to complete your first two sets, and you hit technical failure (0 RIR) after nine reps in your third set, go a bit lighter next time. Since effort is a major factor in progress, RIR helps keep you on track by ensuring that you always work at the intensity that's optimal for how you're feeling in each workout.

Many trainers suggest that you stop shy of technical failure, even on your toughest sets — so it makes sense to shoot for about a 2 on the RIR scale in most sets in most workouts. It won't turn you into a hulking cyborg, but RPE can help keep you on track, pain-free, and moving steadily toward your fitness goals.

Maximize Strength and Hypertrophy With Increased Time Under Tension