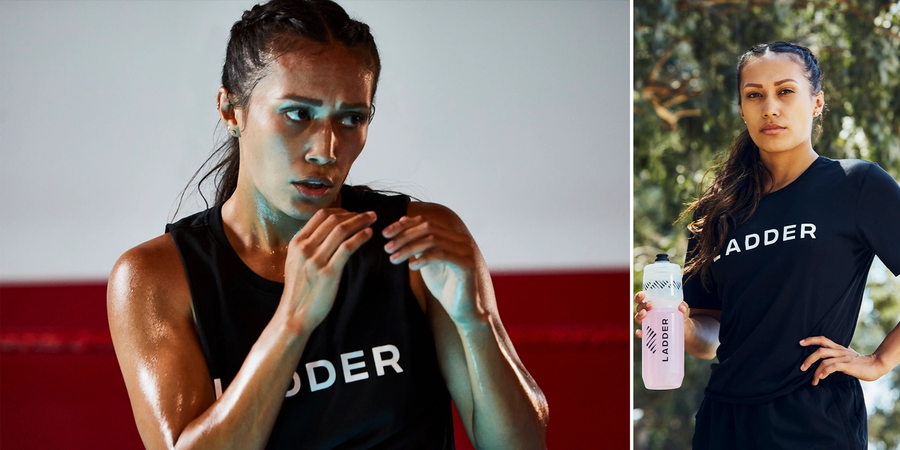 Raised by an avid boxing fan, Seniesa Estrada grew up watching pay-per-view fights and tapes of classic matches with her dad and older brothers.

At just eight years old, she begged her dad to take her to a boxing gym. "He tried to put it to the side," she says. "But I kept asking him every single day: 'Dad, please take me to a gym.'"

Finally, he relented and brought Seniesa to Hollenbeck Youth Center near their home in East LA — the same gym where he had trained as a kid. 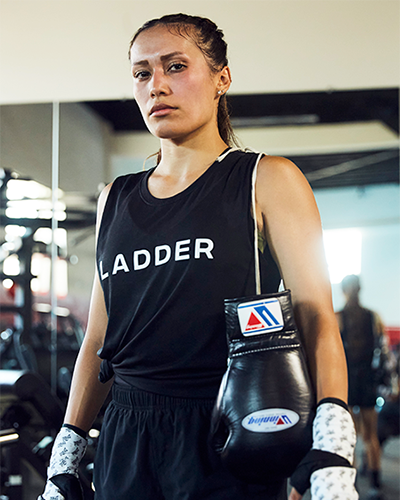 "I remember meeting my first trainer," she says. "He told me, 'I've never trained a girl before. We've never even had a girl walk into this gym.'"

Her dad was still skeptical about her getting involved with the sport, so he asked her trainer to set up a sparring match with a boy in the gym, in the hopes that getting beaten up might discourage her from coming back.

When she stepped in the ring, she had no idea what she was doing. "My technique was bad," she says. "I was just going in there and throwing these crazy punches."

But she won the match — and her opponent left the gym in tears. Seniesa was hooked.

"My dad's plan kind of backfired," she says. "From that day forward, he decided to just let me do it, and he became my biggest supporter."

Two world championship titles later, we talked to Seniesa about how she fought her way to the top and how she hopes to inspire the next generation.

Fuel like the pros with LADDER's line of premium, third-party tested supplements!

LADDER: You’ve been boxing for more than 20 years. Looking back, could you have imagined that you’d be at this point in your career? 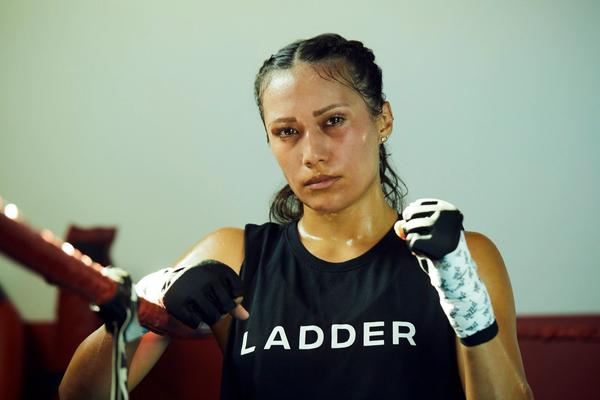 And that was just a seven-year-old-girl with a dream saying that. But I knew it.

How did you earn the nickname "Superbad"?

My favorite fighter is Sugar Ray Leonard — one of the great fighters of all time. When he was a kid, they used to call him Superbad at the gym because he would beat everybody up. So I got the name from him being my favorite fighter — plus, we have that similarity!

What inspired your tradition of wearing a cape when you make your entrance?

What's been your proudest accomplishment in your career so far? What goals are next on your list? 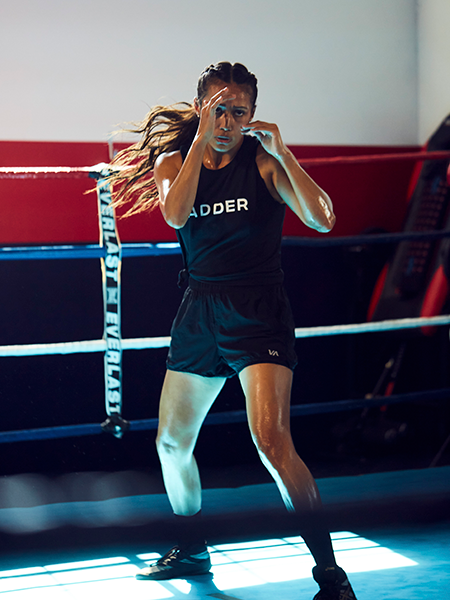 My proudest accomplishment is winning my first world title, which I did this past March. I just fought for a second world title in July, and I'll be going for another world title on November 27th.

My goal is to continue to win world titles at multiple weight divisions. I feel like there's so much more to accomplish in the sport. I'm just getting started, so I have a lot more titles to win.

Besides the titles, my goal is to continue to represent women's boxing as best as I can and hopefully open up the doors for the younger generation that's coming up.

How has women's boxing evolved over the course of your career?

It's so crazy to see how many young girls and how many women are in boxing now. When I was a little girl, I didn't see that. I was the only little girl walking into every gym. We would have to travel across the country just so I could get one fight. I had to weigh in with keys and cell phones in my pocket so I could fight three weight classes above me, because there was nobody at my weight class.

The generation of girls that are coming up now, they don't have to do any of that — which is so cool. So I want to continue to break down the walls for all the young girls and women.

Do you feel pressure to maintain your perfect record?

I don't really see it as too much pressure. I just continue to train hard every day. After every win and each world title, it just pushes me to work even harder to make sure that I keep that perfect record.

The most important thing is to not get comfortable with where you are. You want to keep improving and keep working on things, because there's always something to improve on. You can always be better. So that's what I strive for.

Do you still get nervous before fights?

But as soon as I step into the ring, all the nerves are gone. And I know that that's where I belong. I know that I'm ready to go in there and give it all I got.

What are your greatest strengths in the ring?

Everything… [laughs] I think my greatest strength in the ring is that I can fight many different ways. I can fight in the inside, I can fight going backwards, I can fight side to side. My knockouts have been with body shots, shots to the head, left handed, right handed.

But I also think one of my greatest strengths is my heart and my mentality. I was just born strong minded with passion and heart. That shows in the ring now, and it showed the very first time I stepped into the ring when I was eight years old.

How has LADDER helped your training? 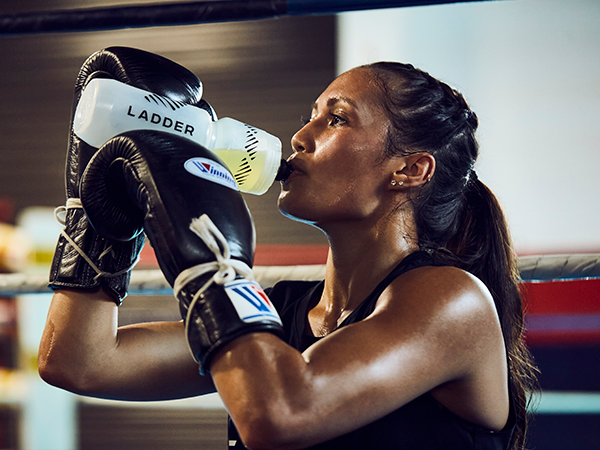 With LADDER, everything tastes great — Pre-Workout, Protein, and even Greens — but it also makes you feel great. There aren't a lot of supplements where you can feel it immediately.

Which LADDER supplements are part of your daily routine?

I have to have my Pre-Workout every day, and I feel so good when I drink my Greens in the morning. I use LADDER Protein before and after training. It's just great how it fits so well into my everyday lifestyle. I love it.

Any other daily rituals you swear by?

As a fighter, music is huge. Waking up and listening to my favorite music to get the day started — and in the gym as well — it sets the whole tone of the day and the mood of training.

I have a big 80s playlist. I'm young, but I'm huge with 80s music. I love Queen — they definitely have a lot of great anthems for training.

What's your ideal way to spend a day off?

How do you keep yourself motivated on days when you don't feel like training? 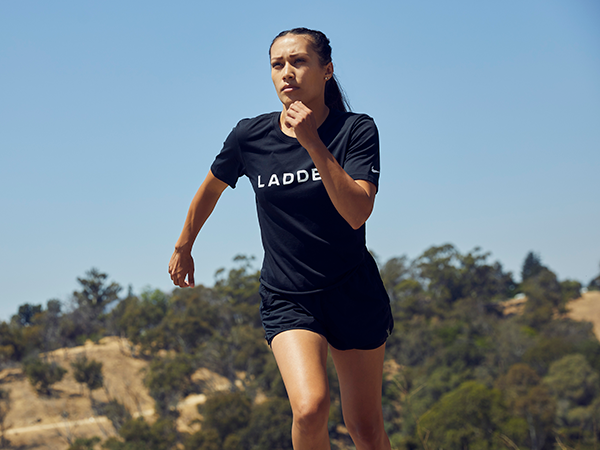 I keep myself motivated by just thinking of how much more I have to accomplish and how much I want to win. I'm so competitive that winning for me is everything.

It makes it all worth it when your hand is raised at the end of the night. So I just think about that.

How has your culture influenced you?

No matter when you're fighting, you're fighting for your culture and for your people. That's just how the sport of boxing is. You're representing who you are. You're showing your heart and your pride in the ring.

I love to represent where I'm from and to see all the Mexican-Americans and Mexicans come out to watch me fight. It's a great thing. And I take my culture and pride with me into every fight.

What advice would you give someone who's looking to take their performance to the next level?

The biggest advice — and the most simple — is just believe in yourself. Don't let anyone tell you that you can't, because you can.

That's one thing that I tell every young girl that I meet who wants to pursue boxing and be at the level I'm at. I tell them, "Just believe in yourself and believe in your vision and what you see for yourself." Because that's what I did at such a young age. I knew where I wanted to be and what I was going to accomplish — and I didn't let anyone stop me with negativity.

“Time Waits for No One” — Meet LADDER Athlete Monique Billings