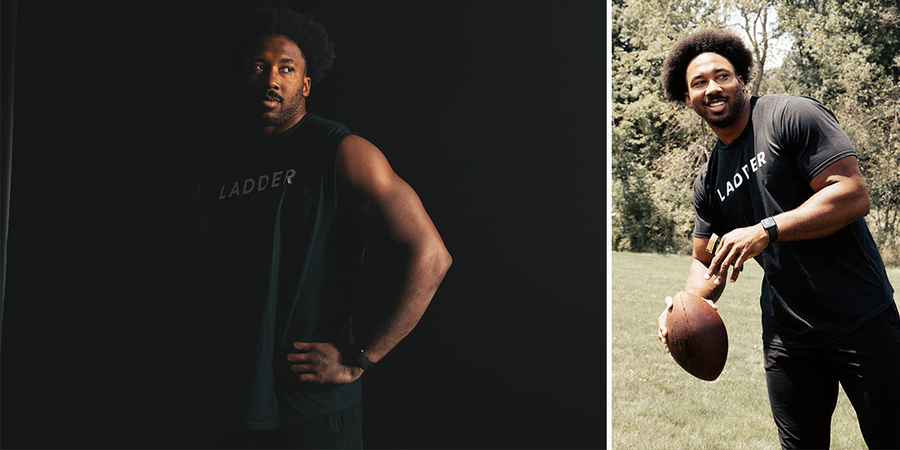 Myles Garrett is a man full of surprises. Not many people expect someone that big to move that fast. Even fewer expect an All-Pro football player to be passionate about poetry and photography. And when we asked the LADDER athlete about his favorite dinosaur, we didn’t expect such a detailed answer.

“I’d have to say the Utahraptor. It's that combination of power and speed. If you're too big, you can't catch and kill your food. But if you're too fast, you can't protect your food or kill it once you capture it. The Utahraptor is the perfect middle ground."

And perhaps Myles is too: Standing at 6'4," 270 pounds, Cleveland's defensive end doesn't exactly qualify as petite. Yet, he remains quick enough (10 yards in 1.57 seconds) to leave any offensive lineman dazed.

Drafted No. 1 overall in 2017 and having dominated the league ever since, Myles Garrett has fast become one of the top defensive threats in football. In fact, through their first 51 games, Myles leads all-time career sack leader, Bruce Smith, by two sacks.

But when he's not on the turf or in the gym, Myles' attention is actually split between poetry, philanthropy, and prehistoric predators. Learn more about this renaissance beast's training, his dreams to write children's books, and why LADDER is the first supplement company to have caught his attention.

LADDER: How do you stay ready to play during the offseason?

MYLES: I never stop training. Wherever I go — even if it's vacation — I always find a way to try to stay ahead of my opponents by working out, eating better, or trying to recover. I just try not to get completely away from the grind, because that's when you fall behind.

I've always been like that, even through high school and college. So it's kind of part of my DNA now. And I don't want to take anything for granted, whether it's working out, a single game, a single minute. You have to make everything count.

What do your workouts in the gym look like?

I like explosive workouts, whether they're just short five-, 10-, 20-yard bursts or power cleans and box jumps. I like deadlifts, curls, triceps, and abs as well.

Ultimately, I work out to maximize my gains and performance. So if I have three sets of five and they're telling me to aim for 275 or 315 pounds and I feel like I could do 345, I'm going to do that. I'm going to go for it until I show myself that I can't do it. Then I'll try it again next time because the only way I know where my limits stand is if I test them.

Any part of your training that might surprise people?

When I'm not playing, I'm just kind of relaxed. That's why I like to listen to music that'll make me feel more amped when I'm training and when I'm getting ready to play. I'll listen to anything from Harry Styles, The Scorpions, George Michael — whatever I'm feeling that week.

I also don't eat before game day. If we're playing a day game, I don't eat the night before the game or breakfast day-of. I don't want to feel bloated. If I feel like I'm starving in the morning, I'll have a couple slices of pineapple at most.

It's no secret that you're a multi-sport athlete. Is there a universe in which you're drafted to the Mavs or Cavs instead?

Absolutely — out there in the multiverse, anything can happen. My parents didn't encourage us to do everything, but at least try everything. They gave me the opportunity to play basketball, and I fell in love with it.

But my knees and my 250-pound body disagreed with me. I've thought to myself, “Dang, I should've just lost that weight and stayed at 220 and just been a hooper." But I eventually moved down to the grass and into the three-point stance and ended up being good at that.

Defensive end is a demanding job title. Do you have any work/life balance, or is football everything?

No, I honestly need to get back on my grind away from football. I know it's ramping up for another preseason, but, not counting camp, I have eight to nine hours to myself to think about what I want to do with my life — not just right now but down the road. So how can I prepare myself, my kids, and later generations to be successful? How can I get a step ahead?

What have you thought about doing after your football career, then?

Dig up dinosaur bones. I'd love to travel the world and do research on archaeological and paleontological discoveries. I'll probably write some poetry books and children's stories if I have it in me while I'm traveling.

So you like dinosaurs, anime, and superheroes. Is there anything that draws you to these larger-than-life figures?

I've always thought about the world being bigger than me and the person next to me. I feel like a lot of people try to just be satisfied with what they can get right now. Instant gratification. They just want to feel good right at the moment because this is within their reach. But you have to go outside of yourself to experience things that you never have.

You're the captain of the NFL Waterboys. Why did you choose this cause?

It's something that's been near to me all my life. I remember those commercials when I was young, seeing impoverished kids starving and not being able to take care of themselves and their families — and having to work so hard with so little.

And as a kid, I always asked my mom, "How can they live like this? How can we not help?" But now I feel like I'm in the space and have the platform to be able to do that.

It's a brand on the come-up. I feel like I align with everyone that's part of this brand. The LADDER team is all about taking care of your body and staying healthy and ahead of the game.

I'm a whey protein guy, so I would go Vanilla Whey and sometimes chocolate. I make a lot of smoothies, and I have to put it in my smoothies every time. You notice that the powder's in there, but it only adds to the flavor in my opinion.

Why were you so averse to supplements in the first place?

My idols and inspiration for playing the game didn't use supplements. They just played the game, ate what they could, and still performed at a high level without using all that. But I eventually realized that I wasn't taking advantage of the supplements that were in front of me.

I feel like I'm getting a step ahead by being a part of LADDER and taking the supplements. They only help to maximize my performance and my health, and you have to use every advantage you can.

A Day in the Life of Dr. Abbie Smith-Ryan