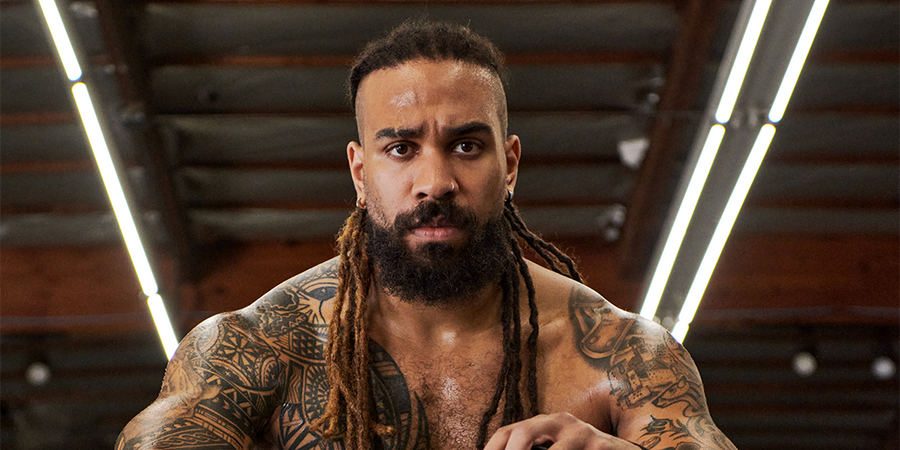 AEW star and LADDER Athlete Kaun is becoming a disruptive force in the pro wrestling scene.

“You see people in this business who aren’t that passionate about it. Now, the curtain’s pulled so far back that everyone knows this is all scripted. But I have this old-school mentality where I want to make it believable when I hit people. And some wrestlers don’t like that.”

In the name of “protecting the business” that he grew up loving, Kaun wants to restore some of its authenticity. He’s not trying to hurt his opponents, but at the same time, he isn’t afraid to check their dedication to the sport — which entails not only acting the part but also looking the part.

Kaun trains six days a week (on top of wrestling at shows on the weekend) to maintain his lean, 230-pound frame. And he manages all this while juggling a full-time job as a graphic designer.

In the ring and at the gym, he's all business, but we got exclusive access to Kaun when we talked at LADDER HQ about what makes him tick. Get to know the man who’s chasing his childhood dream, and his thoughts on wrestling, training, and perseverance. 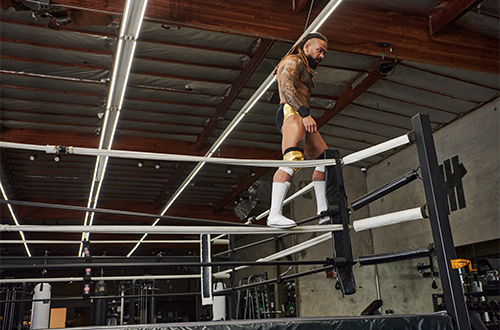 When I was 8, my friend came over with a D-Generation X tape, then I just became obsessed. I was putting posters on my wall, making collages from magazines, and I told my mom to buy a trampoline. I got the camcorder out and I'd film my own wrestling shows in the backyard.

But when you get older, you're not enthralled with it anymore because you know that it's fake and it's just entertainment.

So what got you back into it?

I had just finished grad school for graphic design, and I was working at my first agency. But taking the bus to downtown Minneapolis, commuting two hours a day — it was horrible. I didn't want to do it.

I was at home one day and this WWE documentary came on, and something about it made me feel the same way I did when I was 12. I got goosebumps watching it. And in that moment, I told myself that I was going to become a pro wrestler — like if I don't do this now, I'm going to hate my life. Six months later, I moved to Baltimore and started at a wrestling school out there.

And how does wrestling now compare with the wrestling you were obsessed with as a kid?

There's a lot of people that don't look like — in my opinion — wrestlers. And the business is changing, so that’s fine. But I grew up off the era of Triple H, The Rock, Booker T, The Undertaker, who were like 6’2” and jacked. And now I got people 50 pounds lighter than me trying to powerbomb me. That’s not gonna happen.

People also don’t like making contact with their strikes. We all know it’s a fake punch, but at least I’d hit you in the face — kind of. Other wrestlers are like a couple inches away from my chin, and it takes the audience out of it. I want to suspend disbelief at all times.

How much of your real personality goes into your persona? 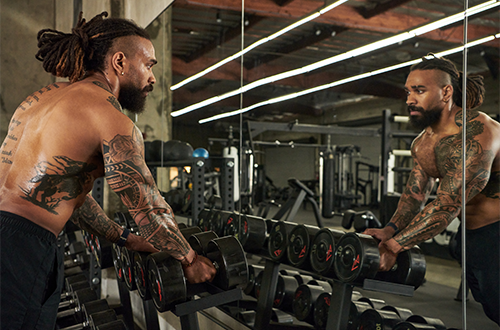 There's an essence of me. The person that's very confident, who thinks they're better and on a higher level than a lot of people, comes out. It takes a little bit to get there, but I think the aggressive, competitive nature's who I really am. I'm just a little bit more reserved in person.

Is that how you approach your workouts too?

Yeah, I train very hard. And with how hard I push myself, these are the results that I've created. I tell people like, go to the gym and actually fucking work out. Don't talk to people and sit on your phone for 30 minutes. I kill it for an hour while I'm in there, and I'm exhausted after I'm done. I take this shit seriously. 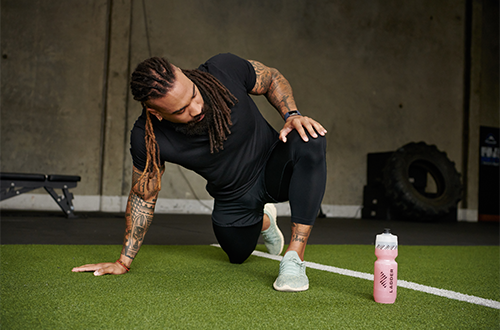 It's always been function. During a football game in high school, I felt a little sting in my back. Two days later, my glutes and hamstrings were so tight that I couldn't even run. So I got an MRI and found out I broke one of my L5 vertebrae and had a spinal condition called spondylolisthesis, which is the slippage of the spine.

When that happened, chiropractors and doctors told me that I could probably never really do sports anymore. I was pretty depressed about that and stopped doing athletics for a year. Then I went to play college football and told my athletic trainers that I never rehabbed my back properly. So we rehabbed for two years, strengthening my hamstrings and hips and training my core.

Now, as long as I don't feel tingling in my legs, I'm pretty much free to do whatever I want. So again, it's all about function. I want to be at a level where I'm able to move around when I'm older without getting hurt.

What are your workouts like on a weekly basis?

I'm doing a six-day split routine. And I don't really take days off unless I have to travel. But if I can work out that [seventh] day, I will. So I do chest, shoulders, triceps one day, legs the next day, and back and biceps the day after that, working each body part twice a week.

I also do Tabatas between my muscle groups. So supersetting burpees and jump rope in Tabatas is the best way for me to replicate what I do in the ring. I realized when I do burpees in my workouts, I'm not as tired during my wrestling matches. I feel great.

A staple has been intermittent fasting, which I've been doing for like six years. I try to fast 14 to 16 hours every day. Other than that, I just kind of go by how I look in the mirror, honestly. I've been doing this for long enough that I know how much food I can take in a day and stay lean.

So I just eat clean as consistently as possible, with some little cheat meals in there. I'm kind of boring — I eat the same stuff every day. I don't really care if it tastes good because it's all just sustenance to fuel my body.

How does LADDER help your nutrition? Any favorite products? 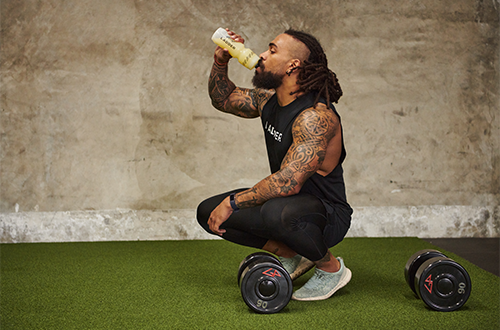 Right now, it would have to be the new Greens. Since I'm trying to reduce my caffeine intake, I'll drink that first thing in the morning. It's low enough in calorie count where I'm not breaking my fast and it's sweet. So I start my day with decaf coffee, and the Greens sustain me until I break my fast.

Then I'll mix Hydration and Pre-Workout before I work out. I don't feel twitchy, but I've noticed how intensely I was working out. And I realized that's gotta be the Pre-Workout. For post-workout, two packs of Protein and two packs of Greens.