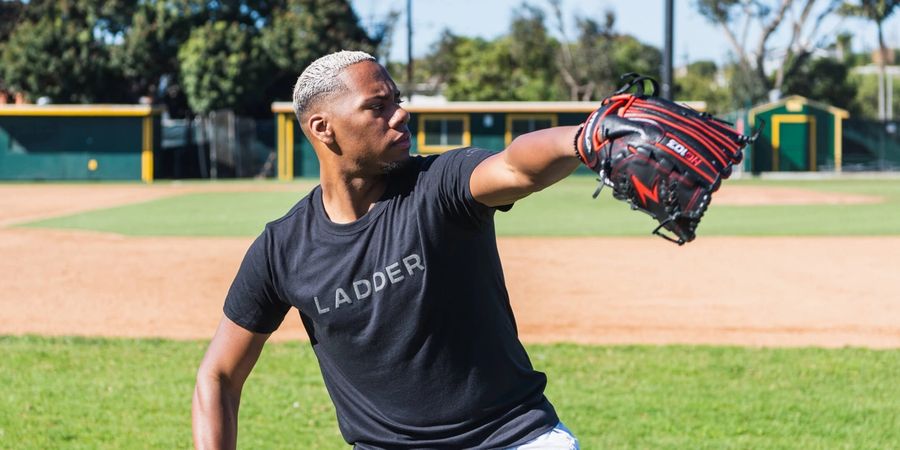 LADDER athlete Hunter Greene is best known for his 103-mph fastballs and his icy demeanor on the mound. Touted as “the star baseball needs,” the 21-year-old pitcher plays with the speed and poise of a true seasoned veteran.

Having overcome adversity both on the diamond and off, Hunter was forged by fire and is better now because of it. Yet when we sat down to talk with the high-profile superstar, he seemed surprisingly… cool.

Hunter explains, “When I cross the line, I have to tap into a different mindset. I’m a dog when I step onto the mound.” But once he steps off, he’s actually a laid-back and easy-going guy. (Maybe it's because of the weekly meditation and yoga he practices.)

Learn more about the athlete’s career, his philanthropy off the field, and how he’s staying ready for this season — all in his own words.

How were you first introduced to the game of baseball?

I believe I was six years old, and went down to a local park. My dad had a wiffle ball, and we just started hitting. He said that my hand-eye coordination was just really, really good. I didn't really miss any balls that were thrown to me. He thought it was pretty special. So I think that's what kind of sparked the idea to keep me in the game.

Was there a moment when you realized you were a level above the kids you were playing with and against?

Well, when I was 11 at the MLB Youth Academy, my dad put me with 14-15 year olds. I didn't have the arm strength to compete with those guys, but my dad was telling me, "You can keep up. You can do it. You just have to continue to work." So I picked up little things here and there from the older guys that I looked up to. I got to see their work ethic and how locked in they were, so I modeled my game after them.

I didn't really notice a difference between me and the other kids until sophomore year of high school. I played for the USA team in Mexico for the Junior Olympics, and by then I had developed the actions and habits that could play at the next level. I was throwing 93-94 mph — I mean, there were seniors in high school that were only throwing like 87-90 mph. So from there, I just continued to get better and better.

What was it like when you were recovering from Tommy John surgery?

I learned so much about myself throughout the process. It was 16 months of rehab, and that was the longest I’d ever gone without playing baseball. And that was a tough reality to go through. Especially because I was rehabbing away from home and my family, it made me learn more about who I was outside of baseball.

More than just having a stronger elbow, I feel like I’ve grown as a man and learned a lot of lessons. I’m a lot more knowledgeable about the game, and I’ve talked to a lot of players that have either had the surgery or just have lots of experience in the game. And being able to talk to them and be mentored by them has been special.

When you mention growing outside of baseball, your scholarship at Notre Dame High comes to mind. What compelled you to start the Hunter Greene scholarship?

My love for community service started when I was eight years old. It was really special to see the impact that I could have on people. So I promised myself at a young age that when I had a platform, I would continue to give back.

With this scholarship, I want to provide the chance to attend a great college preparatory high school to hard-working kids who otherwise wouldn’t be able to afford it. There are so many kids who are driven but just don’t get the opportunity. So my focus is to give these kids the push that they need to do great things in life.

What kind of non-baseball-specific training do you do?

Everything ties into baseball, but I do Pilates and yoga. It's great because they’re full-body workouts, all bodyweight. I see a physical therapist just for maintenance work, even when I'm not hurt or there's no issues. But I go just to work on the little muscles, tendons, and ligaments. All those things are so important.

We also have mental skills coaches who are great. This past year, we would meditate by this pond before we’d go and play. It was really helpful because you’re so focused on training, playing, and traveling every day. So for the players who go through a lot during the season that they don’t talk about, it created a mental and emotional escape — where it was okay to talk about those things. And that brought a lot of value to the team.

When you think about what drives you, what springs to mind first?

For the longest time it was my sister. She was diagnosed with cancer at the age of five; she’s in remission now and has been since she was 10, but that was a tough experience. It was about five years of me doing homework and sleeping in the hospital every night, then going straight to school in the morning.

But as I got older, I learned that it has to be for yourself, too. You put so much time and effort, blood, sweat and tears into making it and excelling as much as you can within that profession. You have to give yourself credit and want to continue to have success — and to be even better — for yourself.

Rosters are constantly changing in baseball. Your name could be called at any point, so how do you stay ready for when that time comes?

Stay ready [laughs]. That’s what it comes down to. Staying ready and making sure that, when that time comes, I’ve handled everything that I can on the field and that I put myself in the best position to succeed.

And I make sure I know how to handle everything else that comes with being a professional — being on the big stage, off-the-field stuff, and distractions. And obviously there will be things that I don’t know how to handle, and that’s when you fall back on your circle, your support system, and you can bounce things off of them and learn from their experiences.

What does it mean to be a LADDER athlete?

It’s a brand that I trust. I know that the product is safe, healthy, and good for me. And it makes me feel proud to know that I’m part of a great brand like this. So it’s not just like I feel good recovery-wise, but also I’m part of a good team. It’s a family that I feel comfortable with and that I value.

How LeBron Builds His Abs: The Core 4 Workout

How to Build Habits That Stick for the Long Haul