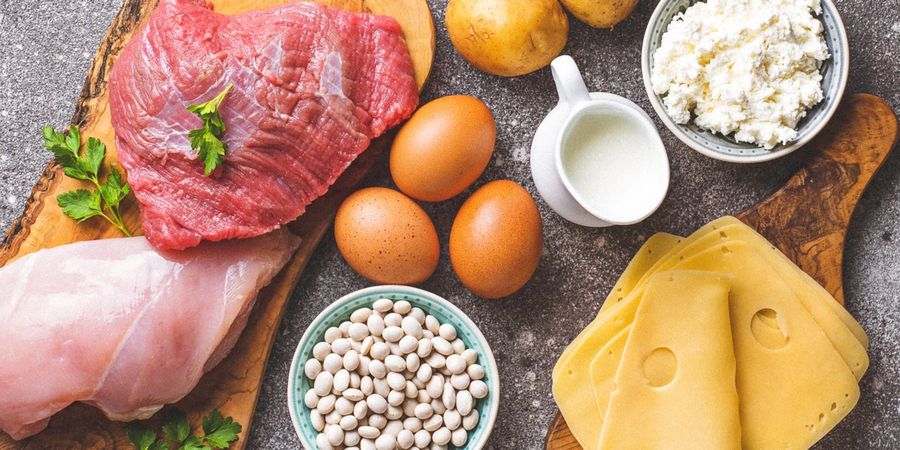 Just the Essentials: An Insider’s Guide to Amino Acids

When Futurama’s cigar-chomping robot Bender refers to his human contemporaries as “meatbags,” he’s pretty spot-on. Excluding water and a little fat, almost everything that makes us who we are — muscles, skin, internal organs — is made of protein.

And unlike Bender’s gears and circuit boards, our protein is in a constant state of “turnover,” being broken down and rebuilt, or “remodeled.” To do this, the body uses building blocks called amino acids. In fact, that’s all protein is — amino acids assembled in various combinations.

Get in your BCAAs with a scoop of Ladder Whey Protein or Ladder Plant Protein.

What Do Amino Acids Do for Your Body?

There are hundreds of amino acids, but we only use twenty of them. Of those, nine are “essential,” meaning our bodies can’t make them, so they need to come from our diet. Five are “non-essential,” meaning our bodies can make them out of the essential ones, so they don’t need to be in our diet. Six are “conditionally essential,” meaning we don’t need to eat them except under extraordinary circumstances, such as after severe injuries or during extreme training, when our body can’t produce enough of them. Today, we’ll focus on the essential ones.

The nine essential amino acids work together, so if you don’t have enough of one, it becomes a “limiting factor” in allowing the others to work. Because of this, it’s important to eat enough of all nine. When you hear the term “complete protein,” it means that the food item has enough of all nine to allow them to all function properly.

Some folks might be happy to leave their knowledge there. Histidine, lysine, branched chain amino acids—do you really need to know the difference? I think so, especially if you’re thinking about supplementing them. In addition to making you a fantastic Scrabble player, knowing your amino acids is a great way to cut through the supplement industry clutter. Which ones should you look for in a supplement and which ones are fine to get through your diet? Let’s have a look.

What Are the 9 Essential Amino Acids?

Histidine recently joined the “essential” ranks. (It used to be considered conditional and therefore required only for growing children.) In addition to supporting physical growth, it plays an important role in tissue repair. It’s required to make red blood cells, and it protects the body against radiation and heavy metals.

It also maintains nerve cell-protecting myelin sheaths, and is required to make the neurotransmitter histamine, a key player in the body’s inflammatory response (when you have an allergic reaction, histamine is what makes your eyes red and itchy).

Despite all these good things (and yes, that irritating allergic reaction serves a positive purpose), it’s not something with which you really need to supplement, except in some clinical situations. However, it’s the amino acid that combines with beta alanine to make carnosine, the stuff in your muscles that buffers acidification so that they can work longer. But even if you supplement with beta alanine, you get so much histidine from your diet that there’s no need to supplement with it as well.

Lysine is believed to ward off herpes. This is because lysine competes with arginine for entry into cells, and the herpes virus needs arginine. (There. I said it. Now let’s move on.) Lysine also helps the body absorb calcium and, along with methionine, produces carnitine, a compound that helps convert fat into energy. (I know what you’re thinking, but supplementing with carnitine hasn’t really been shown to aid fat loss, regardless of what the diet pill ads may tell you.)

Because arginine stimulates human growth hormone (HGH) release and lysine amplifies the situation, the pair, combined with a third amino acid ornithine, is sometimes used as a sport supplement in order to increase HGH. Unfortunately, effective oral doses tend to lead to “gastrointestinal discomfort,” making it impractical, because who wants to be a gassy bodybuilder with cold sores?

Methionine is the clean-up man of the essential nine. It plays a role in several detoxification processes, and it contains sulphur, which protects cells from pollutants, slows cell aging, and aids in the absorption of zinc and selenium. It chelates — meaning it latches onto — heavy metals like lead and mercury, so they can be excreted. It also helps help prevent fat build-up in the liver.

Methionine isn’t a supplement you should use willy-nilly since doses higher than those found in food have been shown to cause brain damage. However, in clinical situations, it has been shown to protect the liver in the event of acetaminophen (Tylenol) poisoning.

When you combine methionine with an ATP molecule, you get s-adenosyl methionine, or SAMe, a fairly common supplement considered to be an alternative to non-steroidal anti-inflammatory drugs (NSAIDs) with fewer side effects — and without the whole brain damage thing.

Phenylalanine is converted to the non-essential amino acid tyrosine, which in turn is used to make the neurotransmitters dopamine and noradrenalin, as well as the thyroid hormone thyroxine (T4) and melanin, or skin pigment.

You may know this amino acid’s name from the warning on diet sodas containing aspartame: “Phenylketonurics: Contains phenylalanine.” As intimidating as this sounds, you probably don’t need to worry about it. Phenylketonuria, or PKU, is a genetic disorder that limits the body’s ability to break down phenylalanine, causing it to build up in the blood. That, in turn, can cause neurological issues. Aspartame is derived from phenylalanine. If you’re worried about PKU, by all means check with your doctor, but you’re probably okay.

Since dopamine is such a highly motivating neurotransmitter, you might assume that taking phenylalanine as a sports supplement would be a no-brainer (so to speak). But there’s no research to suggest that augmenting your diet with both this amino acid and tyrosine can help you boost your athletic performance.

Threonine is important in the manufacture of collagen and elastin (malleable substances in connective tissues that both hold you together and keep you from getting saggy). It helps with fat metabolism and nervous system function. In the body, it changes to glycine, a chemical that works in the brain to reduce unwanted muscle contractions, or spasticity. Animal studies have also shown threonine to be beneficial for bolstering the immune system.

Although it’s available as a supplement, there’s no research showing that it has an ergogenic (performance enhancing) effect when consumed in quantities that exceed daily requirements. (For adults, that’s about 7 mg per pound of bodyweight per day.) But there is research showing that limited intake impairs muscle growth in pigs, so there’s no harm in playing (Guinea) pig yourself to see if you notice a difference.

Tryptophan is sometimes known as the “feel good” amino acid because it’s a precursor to the happy hormone serotonin. Indeed, some people take tryptophan to help them relax, or to treat mental issues such as depression. It’s also a precursor to niacin (vitamin B3), but the serotonin thing is cooler, so let’s discuss that.

In the blood, tryptophan binds to a protein called albumin. But when it’s unbound from albumin, it passes across the blood-brain barrier to synthesize serotonin via the same transport system as branch chain amino acids (BCAAs). Exercise alters this process.

First, it causes muscles to use BCAAs as fuel, freeing up space on the transport system for tryptophan. Second, it increases the concentration of fatty acids in the blood. These fatty acids bind to albumin, displacing tryptophan and leaving more of it available for transport. The result: More tryptophan enters the brain, more serotonin is produced, and you feel groovy.

While great in moderation, this process is believed by some experts to be linked to Overtraining Syndrome (characterized by excessive fatigue, lack of motivation, and underperformance). As more serotonin enters your brain, there’s less room for dopamine, the hormone that pumps you up and gets you moving — or so the thinking goes.

One study showed it to increase exercise duration — probably because it numbed pain — but subsequent studies couldn’t repeat those results. Bottom line: As a sports supplement, it’s probably not your best bet. BCAA’s, which have been shown to both lessen tryptophan’s impact on the brain and prolong time-to-fatigue, are a different story.

Leucine, isoleucine, and valine — the final three essential amino acids — are also known as branched chain amino acids (BCAAs) because of their chemical structure. BCAAs are unique in that muscles can oxidize them directly for use as “fuel” (as opposed to other amino acids, which must be broken down by the liver first).

Each member of Team BCAA has its own strength. Leucine, widely considered the most important of the three, is particularly good at inducing protein synthesis (i.e., muscle building and repair). Valine also plays this role in that process, although to a lesser degree. It is also believed to delay muscle fatigue during prolonged exercise. Isoleucine is good at stimulating glucose intake into muscle cells, thus helping to fuel them.

Even though they play slightly different roles, the lion’s share of supplement research on these three amino acids focuses on how they work as a team, so I really don’t see the point in trying to get fancy and use them individually.

Because of their interaction with muscles and because they compete with tryptophan for access to the brain, thus reducing serotonin and increasing dopamine, BCAAs are a hot topic in the supplement world.

As a fuel source, research on BCAAs isn’t all that impressive, most likely because carbohydrate and fat oxidation in muscles is considerably higher than that of BCAAs.

It stands to reason that BCAA supplementation would help prevent protein breakdown given that 35% of the essential amino acids in muscle protein are BCAAs. However, the studies are all in vitro (not done on living creatures), so there’s no hard evidence showing that orally ingested BCAAs have an anti-catabolic effect.

On the other hand, there’s plenty of research showing BCAAs may help fight fatigue. In one Swedish study, athletes who supplemented with a BCAA and carbohydrate mix showed an improved ability to perform complex tasks after completing a 30-km cross-country run. Another study on endurance-trained cyclists showed BCAA supplementation caused lower perceived exertion and mental fatigue, although there was no difference in performance.

Should You Supplement With Amino Acids?

The disclaimer to all of this advice is that if your diet is solid, you shouldn’t need to supplement with amino acids. There is, however, a growing body of research showing that well-timed protein supplementation (think: smoothies, shakes, and bars) can be beneficial for muscle growth and recovery.

With that in mind, before you begin individual amino acid supplementation, I’d consider taking a protein supplement, which will give you all of the “building blocks” in the correct quantities for them to work synergistically. Trust me, your meatbag will thank you.

Whey Protein Isolate vs. Concentrate: Which Is Better?

What’s the Most Effective Form of Creatine?