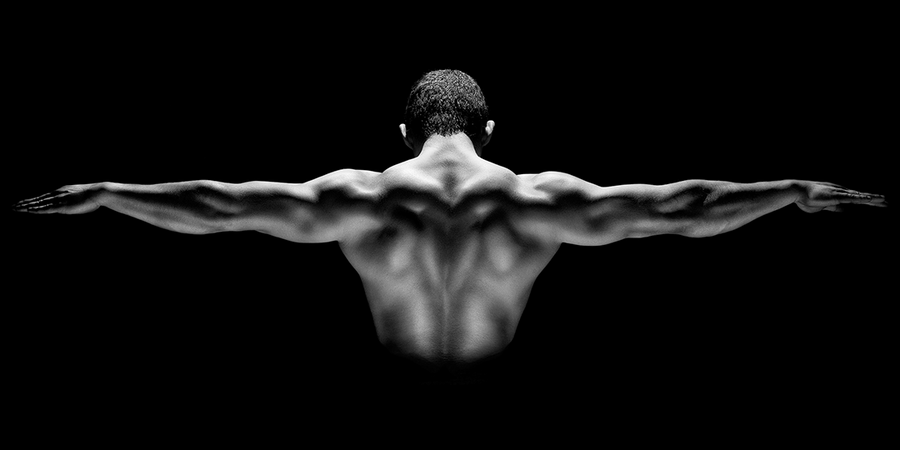 Take a Moment to Appreciate the Art of Bodybuilding Poses

Thinking about attending — or entering — a bodybuilding show? There's a lot more to it than random sweating, straining, and standing around looking crazy-fit. You need to know your bodybuilding poses.

To the average viewer, everyone on a bodybuilding stage looks like a living statue — lean, muscular, poised — and separating winners from losers in a contest seems like a guessing game.

But aficionados of bodybuilding — deemed an "art and sport" by author Charles Gaines in his seminal 1977 book Pumping Iron — know that judges are looking for very specific attributes in each athlete:

They're also looking for a balance, flow, and proportion among muscle groups, with each part contributing to the appearance of a unified whole. One athlete may have big, defined arms but less impressive legs; another may have big thighs but narrow calves; another may have a big chest and shoulders but also appear thick in the waist.

Not, perhaps, the most body-positive pursuit. But at its best, physique contests can be exciting and motivating — a celebration of hard work and the beauty of the human form.

So if you're perusing the web for some #fitspiration, attending your first show as a spectator or competitor, or even looking for a way to track your own progress over time, you'll want to be familiar with the compulsories. Here's a rundown — along with our completely biased opinion on which bodybuilders through history did each pose the best.

Bounce back faster from workouts with Arnold's line of premium whey and plant protein supplements. 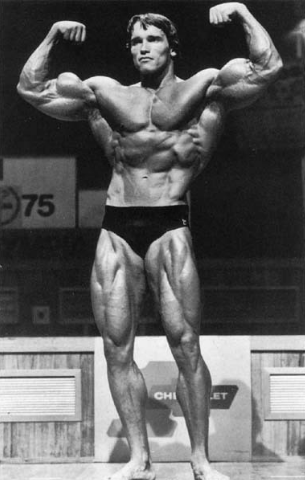 When you pose for a "fitness" pic, this is the pose you strike: arms outstretched, flexed at the elbows, contracting your biceps for all they're worth. That's a front double-bi. Some athletes crunch down on their abs when they do this pose, emphasizing the six-pack.

Others vacuum their stomachs in to create a more tapered appearance. Either way, the pose emphasizes the contrast between the width of the shoulders and the narrowness of the waist, as well as the size and shape of the upper arms and the definition and size of the quads and calves. 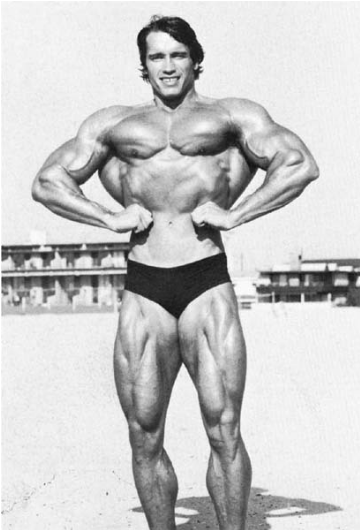 If you've never seen this pose, prepare for a shock: the legs are together, feet turned out to showcase the quads, hands pinching either side of the waist — so far, so good. To perform the pose, the athlete lifts their chest up and out, then spreads the lats — the thick muscles beneath the armpits — to give the torso the appearance of a cobra with its hood flared, preparing to strike.

In addition to the lats, this pose highlights the shoulders (they should look wide, developed, and defined) and the size and definition of the quads.

This pose isn't required in most women's shows. 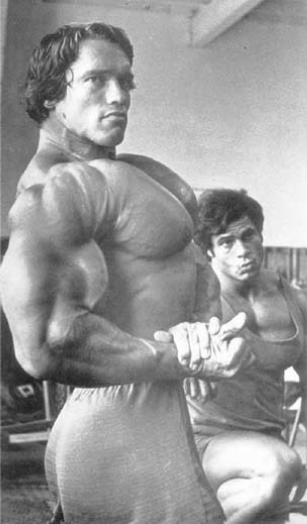 Next up, you'll turn to one side (usually up to the athlete), point your downstage foot to show the calf, and grab the wrist of the arm facing the judges. To complete the pose, you push your chest up and out flex the biceps of the downstage arm for all you're worth.

This pose demonstrates an athlete's thickness — the amount of muscle they carry, particularly in the chest, shoulders, arms, and thighs. It was a favorite of Arnold Schwarzenegger, whose chest was so developed he could reputedly balance a champagne glass on his upper pecs. While many athletes look big from the front, this pose lets the judges see which athlete has the greatest mass. Well-defined athletes also showcase lots of detail in the sides of their waist in this pose. 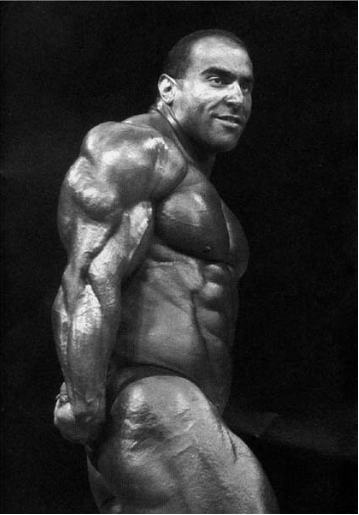 Still turned sideways to the audience, you set up with your legs in the same position as the previous pose, then straighten your downstage arm. Reach your opposite arm behind your back and take hold of your downstage wrist. Finish the pose by flexing your triceps, squeezing your arm against your flank to make it appear bigger, and contracting the muscles on the side of your torso to showcase the definition in your waist and obliques.

While the side tri is a good pose for bigger athletes — like the previous pose, it's a good one for bodybuilders with thick legs — it's also a good chance for more aesthetic bodybuilders to show their lines, symmetry, and definition. 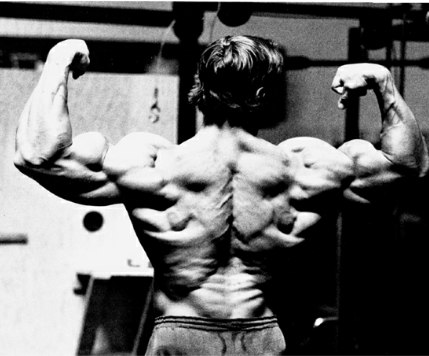 This is the same pose as the front double biceps, only this time with your back to the audience. From the ground up, you contract your hamstrings and calves—pushing through the ball of one foot to show the definition in one calf. Then you raise your arms into the double-bi position.

The key is to contract all the muscles in the back—from the traps and lats in the upper back to the erector spinae — the two snakelike muscles flanking the spine.

This pose takes some finesse:

Do it right, and you'll look wide and defined, with detail popping out all around the upper back like a road map.

Do it wrong — by squeezing the shoulder blades together instead of spreading them wide — and you look narrower and less defined.

This pose shows off the back — naturally—and also highlights the development of all three heads of the deltoids or shoulder muscles. Since a thick, defined back is difficult to build, the back double biceps pose often separates the show's top placers from the rest of the competition. 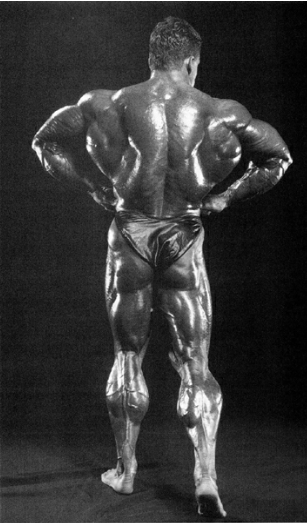 Like the previous pose, this one is the posterior version of an earlier pose. Here, though, the focus is on the width of the back, so instead of lifting your chest high and forward, you round the spine back a bit to enhance the appearance of size from the back, again, looking for that 'angry cobra' appearance. The legs are in the same position as in the previous pose. This pose, like the front version, isn't required in most women's shows. 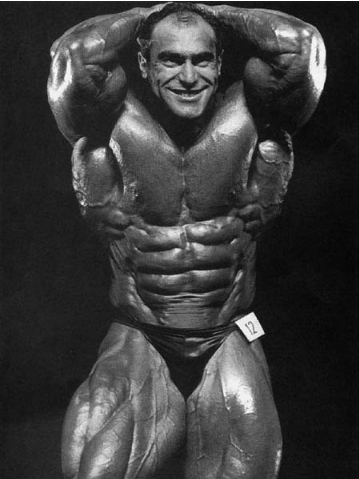 The compulsory round ends with two dramatic bodybuilding poses. In the ab and thigh pose, you face the audience and hold your arms, hands interlaced, behind your head. You extend and flex the quads on one leg and contract your abs as hard as you can, showcasing your six-pack muscles and the smaller muscles around them. Skilled posers can also contract the pecs in this pose, adding some additional detail to the pose.

This pose is all about conditioning — how thoroughly you've managed to shed as much body fat as you can while holding onto as much muscle as you can. The more conditioned you are, the more detail shows in your midsection and thighs. 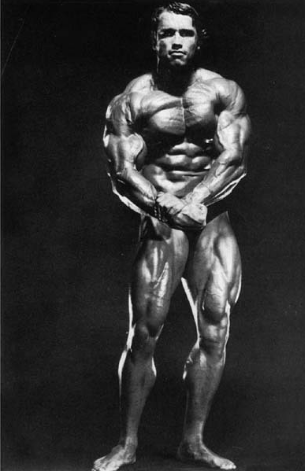 If you've ever seen clips of the old Incredible Hulk show, this is the pose that the eponymous Hulk made his own: arms hugging downwards in twin arcs, chest and biceps contracted as hard as possible. Some bodybuilders perform the pose in a more upright posture, chests up and shoulders square.

Of the compulsory bodybuilding poses, the standard version of the Most Muscular is the most "freaky." Most athletes showcase a lot of veins in this pose, and their traps and necks tend to flare and swell, giving them a slightly distorted shape. But the hardcore fans eat it up.

Along with competing in the comparison round, each athlete is also required to perform an individual routine, set to music, consisting of their favorite bodybuilding poses strung together in a coherent sequence that highlights their best features and downplays their weaker ones. A great individual routine emphasizes the athlete's personality and the qualities of their physique: a big, thick athlete might pose to more dramatic music, while a lighter, more aesthetic athlete might use something classical. A great routine can win an audience over — and sometimes the judges as well.

At the end of the evening, the athletes — or the ones in the running for the top six to ten spots — then perform a group "posedown," each running through their best poses in a final effort to impress the judges and the audience. This round isn't scored — it's usually just a way for the judges to stall while they tally the final results and a chance for the audience to show their appreciation for the athletes' hard work.

Want to Flex Like a Bodybuilder? Check Out Arnold Schwarzenegger's Back Workout