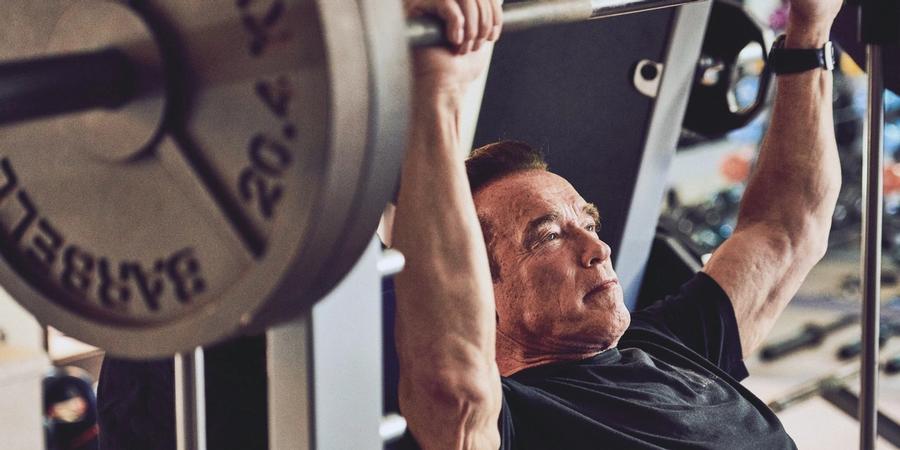 “Great bodybuilders have the same mind that a sculptor has," said Arnold Schwarzenegger in 1975. “You might look in the mirror and say, 'I need a little more shoulder, a little more deltoid, still to get the proportions right.' So what you do is you exercise and put those deltoids on."

When it comes to creating a visual impression of strength and power, Arnold — arguably the biggest star in bodybuilding history — was right on the money. The deltoids — the three-headed, triangular-shaped muscles that look like halved grapefruits on the shoulders of a longtime lifter — might be one of the most impressive muscle groups on the human body. They're visible from every angle. When developed, they give width to the chest and shoulders, which, along with a narrow waist, contributes to a powerful and athletic-looking “V taper" in the upper body.

So it makes sense that Arnold would spend plenty of time and energy building his shoulders. And it paid off. In photos from the early to mid-70s — his competitive prime — he looks like he has to turn sideways to fit through doorways. So impressive were his delts that he even had a shoulder exercise — “The Arnold Press" — named after him (more on that in a moment).

Want to build a set of delts worthy of an Austrian Oak? Here's how he built his championship-winning shoulders back in bodybuilding's golden era.

From pre-workout push to post-workout repair, supercharge your performance with LADDER! Shop all premium supplements.

Arnold was a fan of 'pyramiding': adding weight to the bar as you go along. Traditional approaches to this old-school technique are to add weight with each successive set of an exercise or, conversely, to start an exercise with your heaviest weight and reduce it as you go along. Arnold's take was unique: On a military press, for example, he might have started with 75-pound dumbbells for two sets of 12 reps, then gone up to 85 pounds for the third set and another ten for the fourth. Try this in your training, adjusting the weights accordingly.

Pro tip from Arnold: After completing your lateral raises, grab a pair of the heaviest dumbbells you can handle and hold them in the “up" position. Keep them raised as long as possible, fighting gravity as much as possible as the dumbbells slowly pull your arms downward. This will give your delts some more "time under tension"—a key growth stimulus.

Pro tip: This move has fallen out of favor with many lifters due to the unusual pressure it can place on the shoulder joints when you fail to use proper form. If you experience any discomfort in your shoulders, sub in the face pull.

Pro tip from Arnold: Arnold felt that lowering the weights into the "top of a curl" position in his eponymous move increased the range of motion and, therefore, the move's effectiveness. Select lighter weights than you'd use for standard presses until you master perfect form.

The Shoulders of an Oak

Many modern exercisers perform just one exercise for the shoulders each workout. And for casual lifters, that's plenty. But if you're looking for exceptional development — the kind that wins bodybuilding shows — you'll need additional work.

That's because the deltoids are a complex muscle group, consisting of three heads with distinct functions:

Arnold understood that a lifter needed to work all three heads of the deltoids regularly for that classic rounded look.

So he did — in spades. The 1960s and 1970s were an age of “high volume" training. Pros worked out for many hours each day, performing dozens of sets for many different muscle groups, sometimes twice a day, up to six days a week.

And Arnold was the king of this approach, working out as much as five hours daily, hitting each muscle group three times a week in the months leading up to a major contest.

Arnold did lot of training — more than most modern bodybuilders do, and much more than most of us need. Unless you're blessed with world-class bodybuilder genetics (Arnold wouldn't have gotten far without those), this high-volume approach won't net you much progress. It may even injure you.

So take the Oak's old-school recommendations with a grain of salt, and adjust the number of sets to suit your goals and your current level of fitness. Instead of four sets, for example, try two or three. Or split Arnold's workout into two or three different workouts performed a couple of days apart. For most non-Terminators, such an approach is almost always preferable.

Want to Flex Like a Bodybuilder? Check Out Arnold Schwarzenegger's Back Workout